In a pair of widely shared Twitter videos, a group of people identified by conservative outlet Daily Caller as Proud Boys...

The damage to the signs came as the city endured a wave of violence after supporters of President Donald Trump flocked to the nation’s capital to protest President-elect Joe Biden’s election victory.

In a pair of widely shared Twitter videos, a group of people identified by conservative outlet Daily Caller as Proud Boys can be seen tearing down a Black Lives Matter sign — which bears the logo of Asbury United Methodist Church, a historically Black congregation — and then setting it on fire. The group, mostly of white men, many adorned in the black-and-yellow colors often worn by Proud Boys, then begin to cheer and chant expletive-ridden anthems.

The Proud Boys and Trump supporters burn the BLM banner while chanting and cheering in downtown DC: pic.twitter.com/L16azBBhbr

Proud Boys were also present at the 2017 ‘Unite the Right’ demonstration in Charlottesville, Virginia, that resulted in the death of one demonstrator and have been labeled as a hate group by the Southern Poverty Law Center.

“It pained me especially to see our name, Asbury, in flames,” she said. “For me it was reminiscent of cross burnings.”

Despite the burning, Mills insisted her church’s message will not change.

“We will move forward, undaunted in our assurance that Black Lives Matter and we are obligated to continue to shout that truth without ceasing,” she said. “We are assured that our church is surrounded by God’s grace and mercy.”

The pastor of Asbury United Methodist Church in DC responds to the burning of the church’s Black Lives Matter sign last night by people who appeared to be affiliated with Proud Boys.

“For me it was reminiscent of cross burnings.” pic.twitter.com/eX3aAE7qTJ

Another Washington church, Luther Place Memorial, claimed in a series of Instagram posts that its Black Lives Matter sign was stolen and replaced three times since Friday, when Trump supporters first began to arrive in the city. The post claimed one of the incidents involved Proud Boys descending on the church where they “harassed” Luther Place leaders before taking the sign away.

A clip later emerged of men in black and yellow trampling on what appears to be Luther Place’s second sign Saturday night. As of Sunday afternoon, that sign was restored.

“We are humbled to be a small part of a bigger movement for dignity and justice,” read the church’s post. “We are bold to figure out how we show up declaring out loud, Black Lives Matter!”

Footage of demonstrators ripping down and destroying a Black Lives Matter sign at Metropolitan AME Church — which, like Asbury, is a historically Black congregation — was also widely shared. As a group of black-and-yellow-clad demonstrators hop the church fence and rip apart the sign, someone can be heard chanting “burn it!”

“Will #Trump, who held up a bible in front of a church, bless not condemn this racist vandalism against Metropolitan AME Church?” tweeted Brooks, who is also a former president and CEO of the NAACP.

A spokesman for the Metropolitan Police Department said they are aware of the events and taking them seriously. “We are currently investigating them as possible hate crimes,” the spokesman told RNS.

The attacks on houses of worship came as thousands descended on Washington over the weekend to participate in demonstrations in support of Trump. Speakers at the event repeated claims of widespread voter fraud, despite courts across the nation dismissing the allegations based on lack of evidence. One of the protests, called the “Jericho March,” featured clergy and religious figures who invoked their Christian faith, such as Catholic Archbishop Carlo Maria Vigano and evangelical commentator Eric Metaxas.

“Let us ask God to make truth and justice triumph,” Vigano said in a pre-taped message.

But by nightfall, groups of Trump supporters were filmed roaming the streets of Washington, where they engaged in violent scuffles with counter-protesters and police. Police reportedly had arrested at least 23 people by Sunday morning, and at least four people were stabbed.

In her statement, Mills noted that the White House — which has repeatedly touted itself as a defender of religious liberty — has yet to condemn the violence and attacks on houses of worship.

“We are especially alarmed that this violence is not being denounced at the highest levels of our nation and instead the leaders of this movement are being invited to the White House,” she said, referencing a Proud Boys leader who took a public tour of the White House on Saturday.

The lack of response from the White House regarding the attacks stands in contrast to earlier this year, when Washington’s St. John’s Episcopal Church was damaged by a fire in June after unrest broke out during racial justice protests. The White House was quick to condemn the damage at the time, and Trump visited the church — after the area around it was forcibly cleared by authorities, including the expulsion of clergy from the church’s patio by police — to hold up a Bible.

When pressured to condemn the Proud Boys during a presidential debate with Biden earlier this year, Trump responded by telling the group to “stand back and stand by.”

The White House did not respond to multiple requests for comment.

The post has been updated to include new details about accounts of sign theft at Luther Place. 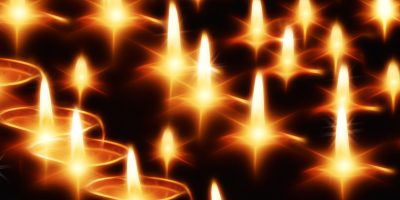 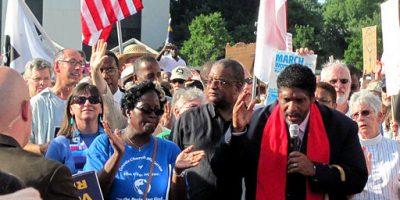 by: Jack JenkinsJune 15, 2020 (RNS) — A series of religious demonstrations in Washington, D.C.,Read More