This Christian preacher was then a devout Muslim.

Hesham Shehab: The Truth Will Set You Free*

Grace to you and peace from God our Father and the Lord Jesus Christ.

Before I was called to faith by the power of the Gospel, I had not only experienced slavery to sin like anyone else, but also bondage to a false religious law; Islamic law.

It is ironic that the Jews, while they were under Roman occupation, answered Jesus saying: “We are offspring of Abraham and have never been enslaved to anyone. How is it that you say, ‘You will become free’?” What I mean is that they were lying, whether they ignored their history in Egypt under Pharaoh, their situation under the Romans then, or their bondage to sin under the Mosaic law.

It is ironic too, because Muslims also claim that Abraham was the first Muslim, he, Abraham, had called them Muslims, and that they have priority over Jews and Christians to be called followers of Abraham, and their book says that Muslims are “nearest kin to him.”

I want to take you back to the year 1980, Beirut, Lebanon, the Middle East.

This Christian preacher was then a devout Muslim. I used to wake up at dawn, in the dark. There were then power cut-outs. The Lebanese Civil War that raged between Christians and Muslims for 15 years destroyed most public services. I used to light a candle, do my ablutions… Sometimes, in winter, the cold water would give me the goose bumps. Walking to the local mosque was a dangerous thing. Christian militias used to shell the residential Muslim neighborhoods with mortars arbitrarily, especially at the wee hours of the morning. So one may be forced to scamper to the mosque under shelling. In addition, local militias sometimes fought in unpredictable skirmishes. Many times innocent people were caught in the crossfire and killed by their stray bullets.

A devout Muslim should pray five times a day in order to go to paradise. A devout Muslim is not supposed to skip one ritual prayer, fast from food and water for 30 days, from dawn to sunset, even if the days were 16 hours, give 2.5% of any annual savings, and go on a pilgrimage to Mecca once in a lifetime, if enough money were available. These criteria are the minimum. Is not that slavery to the law, even if it were a false law?

In addition, a devout Muslim is encouraged to fast Mondays and Thursdays year around, exactly like the Jewish Pharisees used to do. Such voluntary fasting would add good deeds in the scales on doomsday.

On Doomsday, Allah would weigh everyone’s deeds. If you were a Muslim, and your good deeds overweigh the bad deeds, you go to paradise. If not, you go to purgatory where you fry in hell and get purified of your bad deeds until Allah grants you an entry to paradise.

However, even if your good deeds were enough, but not good enough, you will be walking on a bridge over hell with the width of a razor, and would be caught by the hooks that come from the hell fire and take you down to the pit… in order to purge you.

Allah’s fear and the desire to earn his rewards in paradise drive a Muslim to engage in all sorts of good works, and may go on a Jihad, and maybe die while engaging the enemies of Allah, in order to secure a direct entry to paradise, without any reckoning.

However, with all the difficult legalistic demands, and the pressure to conform to the Islamic community, most Muslims become hypocrites.

With the belief in a purgatory, and salvation through works and faith together, Islam was deemed to be a heretic sect of Christianity.

In the Middle Ages, there was a popular view that held that Mohammed was a cardinal whose papal ambitions were thwarted. This is why, he caused a great schism within Christianity, took his followers away and splintered off into a new religious community. But even today, there are some Christian voices that claim that Islam could be a way of salvation, as long as a Muslim would believe in Jesus as a prophet, even if Muslims denied the crucifixion. 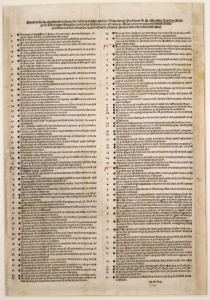 For Luther the only theology true to the gospel is what he called a “theology of the cross.”  He contrasted that to a “theology of glory” that was being taught in all the schools at that time.  Popular theologians, not unlike many modern ones, were trying to get to God through other ways. Those false prophets were teaching that people can come to know God through philosophy, mysticism, and morality, by means of reason, religious exercises, and good works… Yes, it sounds like some false teachers in Luther’s days were like what we have today.  It is the most dangerous thing, when Satan and his servants masquerade as ministers of righteousness (2 Corinthians 11:13-14).

A lie mixed in with truth is much like rat poison, which contains 99% good food and 1% poison – it’s that 1% of poison (or lie) that will kill you!

When I first came to America, 14 years ago, I landed in Michigan. Even though I was a rookie, never been yet to seminary, Fort Wayne, when I sat in a Bible study, at a Missouri Synod Lutheran church, a book was being taught there about a purpose in life, how a purpose could drive your life, and how to be in the driver’s seat. That day, I walked out of that Bible study and never went back. If I were to be in the driver’s seat,  and count on my personal discipline to fulfill my purpose in life, I will be condemned.

This only shows that we need a daily reformation in our church, and that labels like Lutheran may not mean much, if we are not preaching Christ and Him crucified, and we are set free by the Truth.

It is not enough to say that our teaching is based on the Bible. This is a general statement that many theologians of glory hide behind. We have to make it clear that we preach Christ Crucified, as well as do it. We need to examine closely what is popular and attractive, and weigh it with the scales of the Word of God. It seems that we need to sort out the real Christ from that of the American Evangelical culture.

Theologians of glory flee from the hidden and crucified God. Ashamed to find God in the cross of Christ, their pride tells them to look for God in loftier places, in peak experiences, in which people scale the heights of their own human potential, their reason, creativity, their emotions and imagination.

Only in mere Christianity do we find this idea that God and the gallows go together.  In other major religions, God is high in his heaven and far away.  We humans are supposed to go there on the wings of our own reason and experience, our religious rituals and good deeds. Eventually, man would be worshipping himself.

The American University of Beirut, where I went to college, was founded by a Presbyterian Mission in 1867, but later became secular. At that college, there was a humanistic thread or theme that went through all Western cultural studies taught to the students. It said that during the Middle Ages, God was the center of the universe, but after the Renaissance and the Enlightenment, Man became the center of the universe.  It is ironic that it was there, at the American university of Beirut that I first heard the Gospel in a course of cultural studies, from the mouth of a secular professor. The Word of God “shall not return empty, but it shall accomplish that which I purpose, and shall succeed in the thing for which I sent it” – Isaiah 55: 10

I left a god who wanted me to die for him to the True God who died for me.

I left a false god who wanted me to die for him, and followed the true God who died for the forgiveness of my sins.

What are the chances for a devout conservative Muslim to become a Lutheran pastor? 0… actually all the odds are against that.

Maybe you would say that the American University of Beirut played a role in that! But that college education produces cynics and atheists!

OK… what is the chance for a Shiite terrorist to become an Evangelist? Muhammad Al Mousawi was a Shite Imam who came to Syria to kill Sunni ISIS fighters…the blood bath he witnessed mad him get disgusted with Islam and Allah…he became an atheist… to make a story short, he was reading world philosophies, and started reading the NT in Arabic…he saw Jesus in a vision…he was disowned, excommunicated, and the Shiites in Iraq issued a death verdict against him…he fled to Europe where he became an Evangelist.

What are the chances for a guy who robs Christian cemeteries; mausoleums in Lebanon to become a pastor…that was my friend pastor Muhammad Yamout who preaches in Hizbullah land in south Lebanon, and has planted many churches in the Middle East, against all odds.

What are the chances that God will give up all His glory, come down to earth and take human flesh? No way! But Jesus did that…against all odds in order to give us freedom…this is the Truth with a capital “T,” a very dramatic Truth, a life-saving Truth.

We, human beings were on an eternal death row, but Jesus humbled himself and came down to earth to save us.

Jesus…though he was in the form of God, did not count equality with God a thing to be grasped, but emptied himself, by taking the form of a servant, being born in the likeness of men. And being found in human form, he humbled himself by becoming obedient to the point of death, even death on a cross. Therefore, God has highly exalted him and bestowed on him the name that is above every name, so that at the name of Jesus every knee should bow, in heaven and on earth and under the earth, and every tongue confess that Jesus Christ is Lord, to the glory of God the Father (Philippians 2).

What is so great about this salvation is that we receive it through faith alone on account of Christ alone.  What hangs in the balance is the issue of bondage or freedom.  Freedom is the very essence of salvation.  In his letter to Pope Leo X , known as “The Freedom of a Christian,” Luther wrote, echoing 1 Cor. 9; 19:  “A Christian is free. . .and in bondage to no one.”  Yet, at the same time, he said, “A Christian is a servant, and owing a duty to everyone.”

Two things are necessary for the life of the Church, justification, and Christian liberty.  And it all hinges on the Holy Word of God, the Gospel of Christ.

Freedom is ours as the Holy Spirit works through God’s Word as we abide in the Word of Jesus Christ.  Only His Word brings freedom and life.  Only through His Word does the Son set us free and if the Son sets you free, you will be free indeed.”  Amen.

Editor’s note: The Reformation is usually dated to 31 October 1517 in Wittenberg, Saxony, when Luther sent his Ninety-Five Theses on the Power and Efficacy of Indulgences to the Archbishop of Mainz.