The Cost of Mission

Grace to you and Peace from God our Father and the Lord Jesus Christ.

Today, I want to talk to you about what ministry is. Christian ministry is taking your gifts and resources and meeting the needs of people in Christ’s name, in one hand, and having the Gospel in the other.

I am not talking about people who are supported financially to do this with all of their time. But about us all, since we are a royal priesthood, according to

1Peter…You’re a holy nation. And all of us are called into ministry when we’re called to Christ. What’s that mean? I just want to share fairly briefly some of those principles that govern our lives, as Christians. I’m just going to read from Genesis chapter 12, which is God’s call to Abraham, and from it I like to extract three principles, Genesis 12, 1 to 4, the Lord had said to Abraham, leave your country, your people and your father’s household, and go to the land I will show you, I will make you into a great nation and I will bless you and I will make your name great. And you will be a blessing…Abraham was 75 years old when he set out for Harran. Now let’s extract a couple of principles here.

The first thing we learn from this and from many other similar texts in the Bible is that whenever you meet God face to face… whenever you get a grip on who God really is, it changes you into a person in mission. Anyone who meets God as he really is would be sent out. That mountain-top experience pushes you out. The word mission is from the Latin word MISSIO, which means to be sent. This is telling us that when you see God as he really is, it destroys your consumer mentality. It destroys your what’s in this thing for me mentality. And it immediately turns you into a man or a woman in mission, sends you out. Look, this is Abraham situation. God told, get out, get out of the familiar culture and where you’re comfortable, get out of your safety zone. Go to some place that I don’t even, I’m not even gonna tell you about it before you get there. Take great risks. Now you might say, well that was very severe, but that’s just Abraham.

Nope, not only Abraham! Listen, the first time God meets Moses face to face… in Exodus 3, the burning Bush and almost immediately upon Moses grasping the glory of  God for the first time, God: “go to Pharaoh, go”!.

Also, Look at Peter…  in Luke chapter five, Jesus comes up to the fishermen and they’re in the boat and they’ve been out fishing all night and, Jesus says, how did you do? And Peter says, there’s nothing out there. Nothing is biting. He says, I’ll tell you what, go out a little further and put your nets down on the other side of the boat.

Just one more time…, they must have said this is stupid, but they did it. And they get such a huge catch of fish that the boat begins to sink. And what does Peter do? He throws himself at Jesus’ feet because for the first time in his life, he’s gotten the glimpse of the glory that’s veiled under the humanity… And he threw himself down and he says, depart for me, I’m a sinful man…and what does Jesus say? I’m going to make you fishers of men…immediately every time.

You become a man or a woman in mission. Do you know what that means? Jesus. You know in John 17, Jesus Christ says as the father, sent me, I will send you… Talking about us, his disciples.

Christ is the greatest missionary, and we are called Christians, which means little Christs…And five verses before that he says to the father, I’m telling them all these things that they might have my fullness of joy.

That’s the first point, if you really see God and who he is, you lose your consumer mentality. You stop saying what’s in it for me and you start saying, how can I spend myself ?!

“If you spend yourselves on behalf of the hungry
and satisfy the needs of the oppressed,
then your light will rise in the darkness
and your night will become like the noonday.”

When you get out, you also get out your wallet because you suddenly realize that there are many needs and you start to dig deeper. You can’t be a blessing to others unless you’re willing to lose things.

You can’t, unless you’re willing to get out, but you see at that point, when you get out, you’re just like Jesus, because Jesus Christ had it, and at all costs got out so that we could be reached. In the same way, if you are not willing to begin to take risks, to open your mouth so people might laugh at you.

That’s the second principle. You in other words, you won’t be a blessing to anybody else unless you’re willing to lose things.

It’s God coming alongside and making you know that He loves you, then you would say, I will do God’s will, whatever it takes. I don’t care. I’ve got what I need.

Just attempt great things for God, and he will give you gulps of himself.

He’ll give you huge portions of himself. That’s the promise. God says, if you know me, you become a man or woman in ministry. You will bless others, that won’t happen unless you’re willing to lose things. He is a jealous God who won’t abide in your heart with the idols of this world. If you’re willing to lose things, I will come down into your lives. It’s one of the reasons why many of us have never felt this reality because we’re not willing to get out.

I want to digress today, and talk a little bit about the heinous act of terror that took place last Monday in Highland Park.

I want to ask: What Happened to the America that the late President Ronald Reagan called “the shining city upon a hill.” Reagan’s speech writer took that imagery from the Matthew 5 14 You are the light of the world. A city set on a hill cannot be hidden.

But Reagan’s speech built on the phrase preached by Puritan pilgrim John Winthrop in 1630, while still aboard a ship bound for Massachusetts Bay, Winthrop delivered his sermon “A Model of Christian Charity.”

He said, “For we must consider that we shall be as a city upon a hill. The eyes of all people are upon us. So that if we shall deal falsely with our God in this work we have undertaken, and so cause Him to withdraw His present help from us, we shall be made a story and a by-word through the world.”

America, from a “Shining City Upon a Hill,” to a story and a by-word through the world, “if we deal falsely with our God.”

My heart weeps as we see innocent victims of aimless violence across the nation. As a sort of an observer who wrote in newspapers on international affairs and taught in schools and colleges and pastored for 35 years, I would say that the collapse of the Church and the family are behind this murderous madness. Statistics say that in 2016, 40% of children in the USA were born out of wedlock, compared to 28% in 1990. Many children are raised without the care and love of parents who are single and juggling their jobs and lives at the same time.

The Church, or I must say that many churches have become irrelevant in the American way of life. For sure, the politics of the country bears some of the blame, but I believe we have to admit that we, Christians, are not involved as we should in the lives of people.

In DuPage County, we have the world at our doorsteps. In one apartment complexes in Wheaton, 17 languages are spoken. Not only that, North America and the West have become the largest and most difficult mission field. Not only are we faced with the challenge of people from different religions, we have the unchurched, atheists, agnostics, and others. We have to trust God and go into the world and partner with God in His mission. And he will bless us.

Thank you Father for giving us these lessons in the Bible and for reminding us of what these patterns mean. We pray that the holy Spirit will give us boldness to share the gospel with the lost.

We ask this in Jesus’ name, Amen. 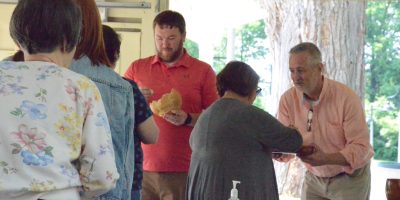