Hill’s termination at CNN followed a speech at the United Nations....

By Hesham Shehab
May 10, 2019 – Marc Lamont Hill, the recently-fired CNN contributor, will be the keynote speaker for a Christian Palestinian non-profit organization that promotes anti-Israel propaganda in churches in the West.

Hill’s termination at CNN followed a speech at the United Nations, where he used the anti-Israel eliminationist rhetoric “from the river, to the sea.” He will be the keynote speaker, at the Bright Stars of Bethlehem (BSB) on 15th Anniversary Gala Celebration in Chicago on September 29. 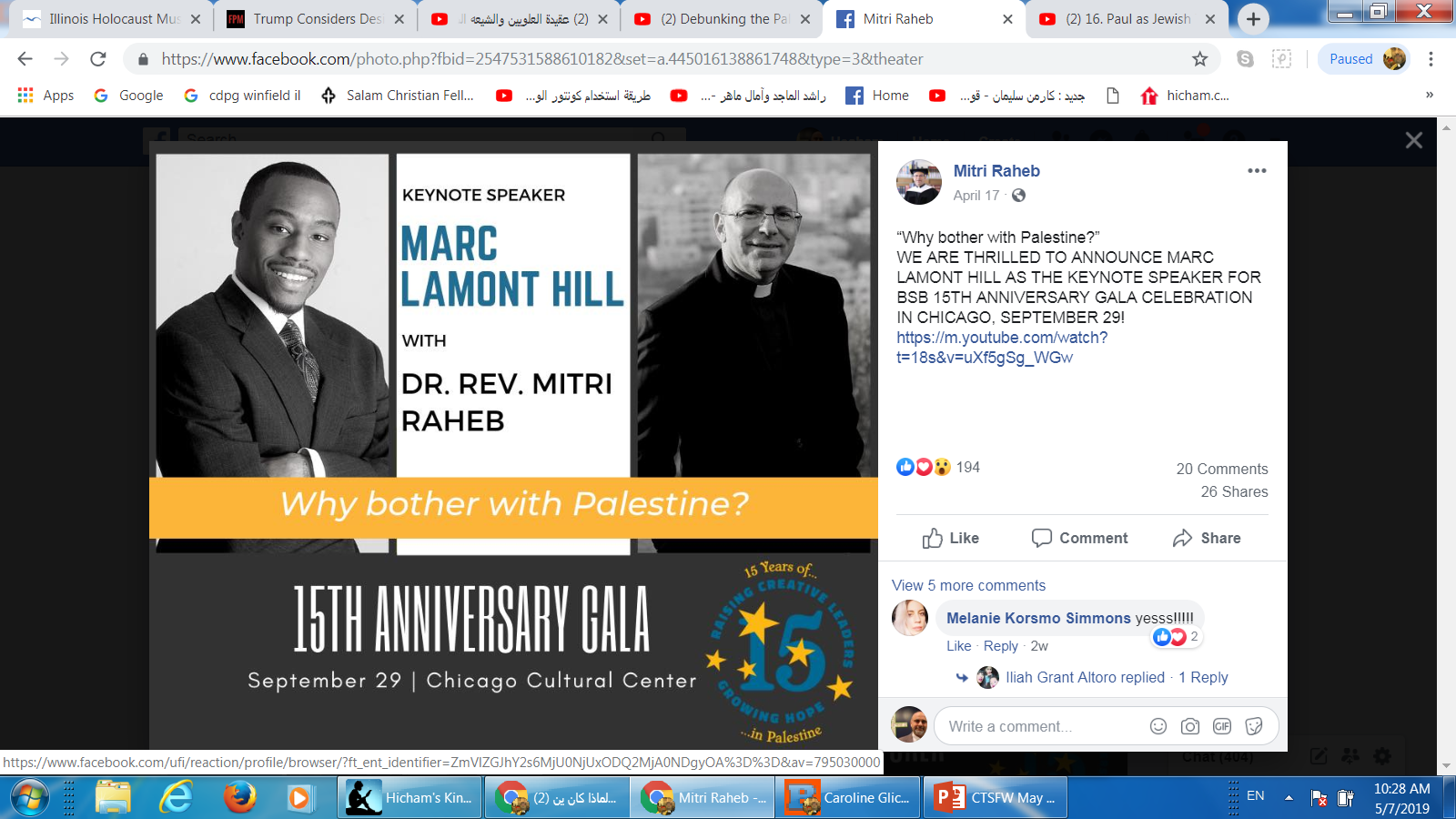 BSB was founded in 2004 by the Palestinian Pastor Rev. Dr. Mitri Raheb who promotes anti-Israel views and seeks to delegitimize and demonize the Jewish state. In addition, Raheb plays a leading role in the Boycott, Divestment and Sanctions (BDS) movement in the Christian communities in the United States.

BDS is a global campaign promoting various forms of boycott against Israel until it meets what the campaign describes as Israel’s “obligations under international law.” The campaign is organized and coordinated by the Palestinian BDS National Committee under the guise of human rights in order to delegitimize and destroy Israel.

Raheb carries out campaigns in Christian communities with the aim of depicting the State of Israel as an apartheid state. He says that Israel “has now assumed the role of Pharaoh,” and calls for an end to American aid to Israel.

In the wake of the fighting that erupted between Israel and Hamas on May 4 and 5th, Raheb posted on his Facebook page a prayer request only for Gaza, ignoring the suffering of innocent Israeli citizens under the barrage of hundreds of rockets launched by Hamas from the Strip.

In addition, Daniel Swindell described the duplicity of Raheb, and wrote on his Blog: “In 2017, two Druze-Israeli policemen were shot to death near the entrance to the Al-Aqsa Mosque. In response, Israel attempted to install some new metal detectors (…) However, the Palestinians held protests against the installations of these metal detectors. Raheb joined in these protests (…) and declared that his visit to Al Aqsa was an ‘unforgettable night… demonstrating… Christian-Muslim unity as a tool of creative resistance.’”

Raheb promotes an upside-down worldview that condemns a democratic nation for protecting its citizens, and sympathizes with the Islamic terrorist theocracy in Gaza, and the kleptocratic Palestinian Authority that seek to destroy their neighbor.

In a YouTube video, Raheb summed up the pro-Palestinian Christian narrative that works for his benefit in the West Bank, where Christians are a minority in a sea of Muslims.

In that video, Raheb tried to obliterate the historical Jewish bond to the land of Israel and ignored the Old Testament’s detailed narratives. He asserted in that video: “Unfortunately, Palestine has been occupied for most of the time. Remember, the first people to occupy Palestine were the Assyrians -722, then we had the Babylonians – 587, then the Persian came, 538, all of this is BC – OK? Then the Greeks, then the Romans, then the Byzantines, then the Arabs, then the Crusaders, then a few others, then the Ottomans, then the British… and then Israel.”

The most troubling part of Raheb’s revisionism of the Jewish roots of Christianity is that such Christian Palestinian leaders bring this message to so many American churches – without ever being confronted by the leaders of these Christian congregations.

Meanwhile, Christians in the West Bank and Gaza are decimated. Michael Oren, former U.S. Ambassador to Israel summed up this tragic reality in his Wall Street Journal article in 2012. He wrote that since the Hamas takeover of Gaza in 2007, half the Christian community has fled. Christmas decorations and public displays of crucifixes are forbidden. 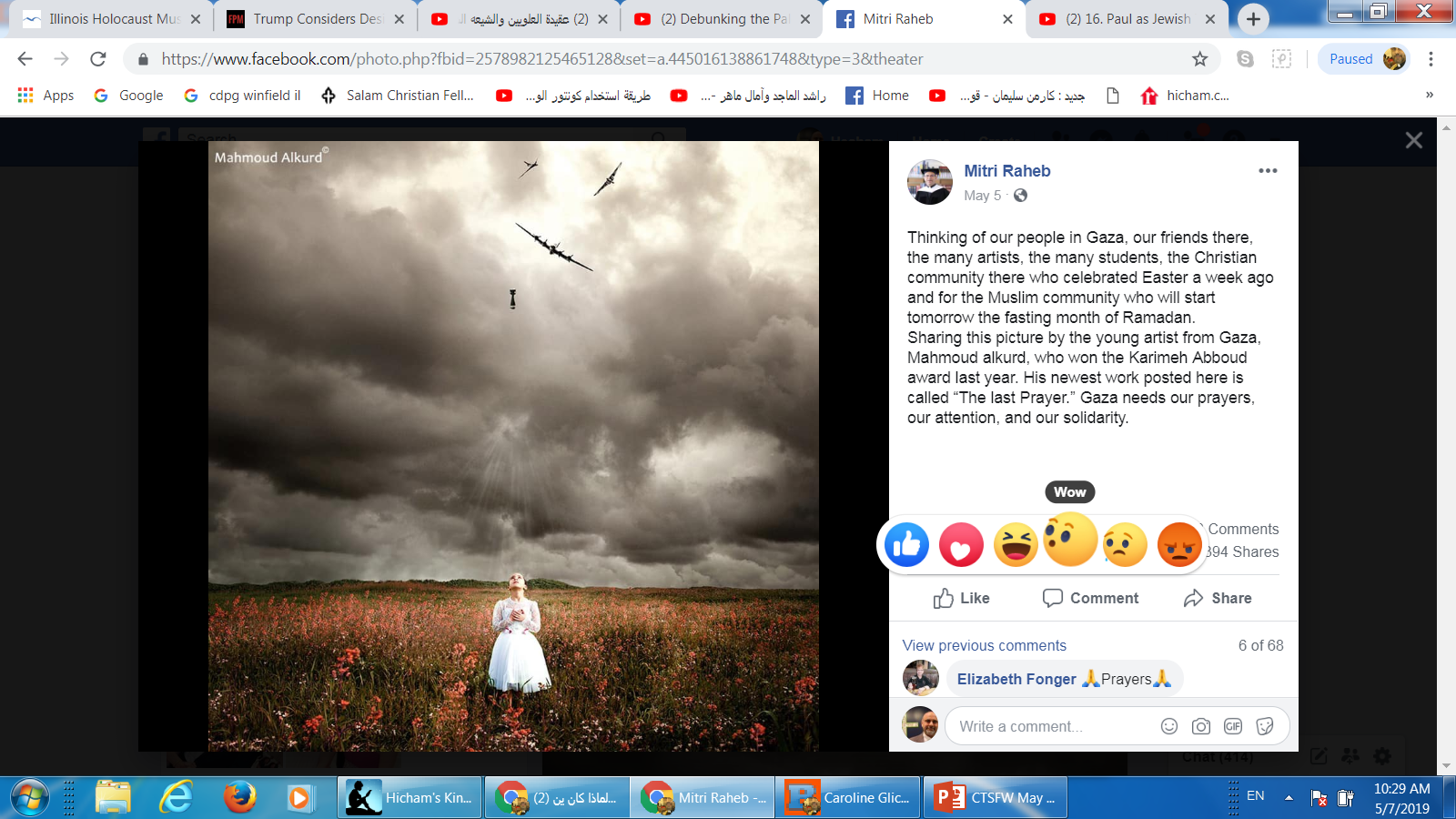 In addition, the West Bank is also hemorrhaging Christians. Once 15% of the population, they now make up less than 2%.

Dexter Van Zile notes, “Because of his [Raheb’s] ties and utility to the Palestinian Authority, Raheb has been able to build something of an empire [a college and two NGOs] in the West Bank (…),” often described “the third largest private employer in Bethlehem.”

Van Zile adds, “Like all empires, Raheb’s promotes a story that legitimizes its existence to itself and to its core constituents, which in this case are proponents of Israel’s destruction in Palestinian society and anti-Zionist activists in North America and Europe.”

Therefore, Raheb is using Marc Lamont Hill in order to raise funds for his institutions, and the Left is using him to justify their anti-Israeli narrative.

Hesham Shehab is the Illinois Associate of the Counter Islamist Grid.