American authorities should move seriously to start a public debate...

American authorities should start a serious public debate that aims towards banning the Niqab and Burqa that some radical Muslim women wear.

A niqab covers the face while leaving the eyes uncovered, while a burqa covers the entire body from the top of the head to the ground, with only a mesh screen allowing the wearer to see in front of her. 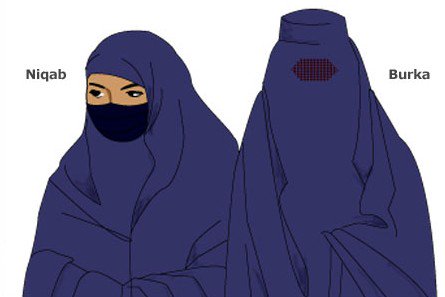 Driving my son five days a week to school, I often come across a young girl walking herself to school.  She is covered in black head to toe. Only her small eyes show through her niqab. Because of that, it is difficult to give a precise estimate of her age, but most probably she is not more than ten.

I also see older girls wearing niqabs at colleges and I can swallow those cases as a matter of choice. But that young school girl and others her age are certainly coerced or brainwashed into wearing the niqab by family, mosque or madrassa.  Such baggy and drab, cumbersome garb worn at an early age robs them of their childhood and may hinder the development of some of their social and personal skills for a lifetime.

Amid the debate over banning the niqab and burqa in Europe in 2017, Qanta Ahmed, a British Muslim female doctor who had worked in Saudi Arabia for two years, wrote in the Spectator:

“For those two years, I became intimately acquainted with the cumbersome nature of forced veiling and its impracticality — even seeing it imposed upon my unconscious female patients. Where the veil is mandatory, a kind of oppression is implemented: an oppression that has absolutely no basis in Islam.”

The rigid interpretations of the veil are a recent invention in the Islamic World. They are not derived from the Quran or early Islamic traditions. Islamic Sharia law gives no details on how women should apply their veil.

Elham Manea, a Swiss-Yemeni citizen and the author of Women and Sharia Law, argued that such veils are not Islamic, but a tradition that came from the heart of Saudi Arabia, a region called Nejd.

Manea wrote that the veiled garment was not worn by women outside of Nejd until Saudi Arabia’s Wahhabi regime came to power in the late 1970s.

“The re-Islamization of Saudi Arabia according to the Wahhabi Salafi fundamentalist principles led to the mainstreaming of the burka,” she said.

“With Gulf money you had a promotion of this ideology and a reading of Islam that turned the burka into an ‘Islamic’ tradition.” Manea added.

Qanta Ahmad asserted in the Spectator that the veil, as we have come to know today, actually has more to do with a set of quite new cultural mores.

The Islamists wish to say: we Muslims are different from the West. This trend gained momentum with the growth of fundamentalist Islam, and the 1979 Iranian revolution. The revivalist fervor spread quickly from the Shia to the Sunni world as Saudi Arabia and Pakistan started to impose Islamization programs.

Ahmad described the trend in her article as “a sort of totalitarian Islamism that wanted not just to run the government but to police what women chose to wear.”

The veil is a sign of segregation, separation, and rejection of modern values— values of acceptance and tolerance and otherness. It reflects a culture that treats woman as a sexualized object that has to be covered.

Such divisive Islamist practices engender hostility to immigration and refugees in the West, which, in turn, helps radical Muslims promote the idea of Muslims being a society-within-a-society.

Hence, Islamists invent religious grounds to persuade Muslims in the West to dress differently, or embrace other radical issues in order to assume leadership positions in those Islamic communities and promote their agenda.

The European Court of Justice moved in 2017 in order to restore the European identity: secular liberal democracy, where the public space is shared by all, and dominated by no one. Thus, many European countries put a ban on niqab and burqa in the public space, including Germany, Austria, France, Belgium, the Netherland, and some parts of Italy.

While the phenomenon of wearing the niqab and burqa is not as widespread in the United States as it is in Europe, American authorities should move seriously to start a public debate that aims towards banning this oppressive Islamist practice.

America’s greatness is in both her tolerance and her synthesis of diverse cultures into a melting pot. America would be doomed if she becomes a conglomeration of Third World Countries ghettos.

If you would like to support Hesham Shehab, pleases donate online or see www.muslimsforthemessiah.org