Kamani has a long history of misogynistic and violent statements...

Hesham Shehab: Hate Preachers Fundraised for Chicago Islamic Charity with a Dark Past

An Islamist group hiding under a façade of charity and interfaith raised funds in the Greater Chicago area with a program featuring an imam notorious for hate speech. 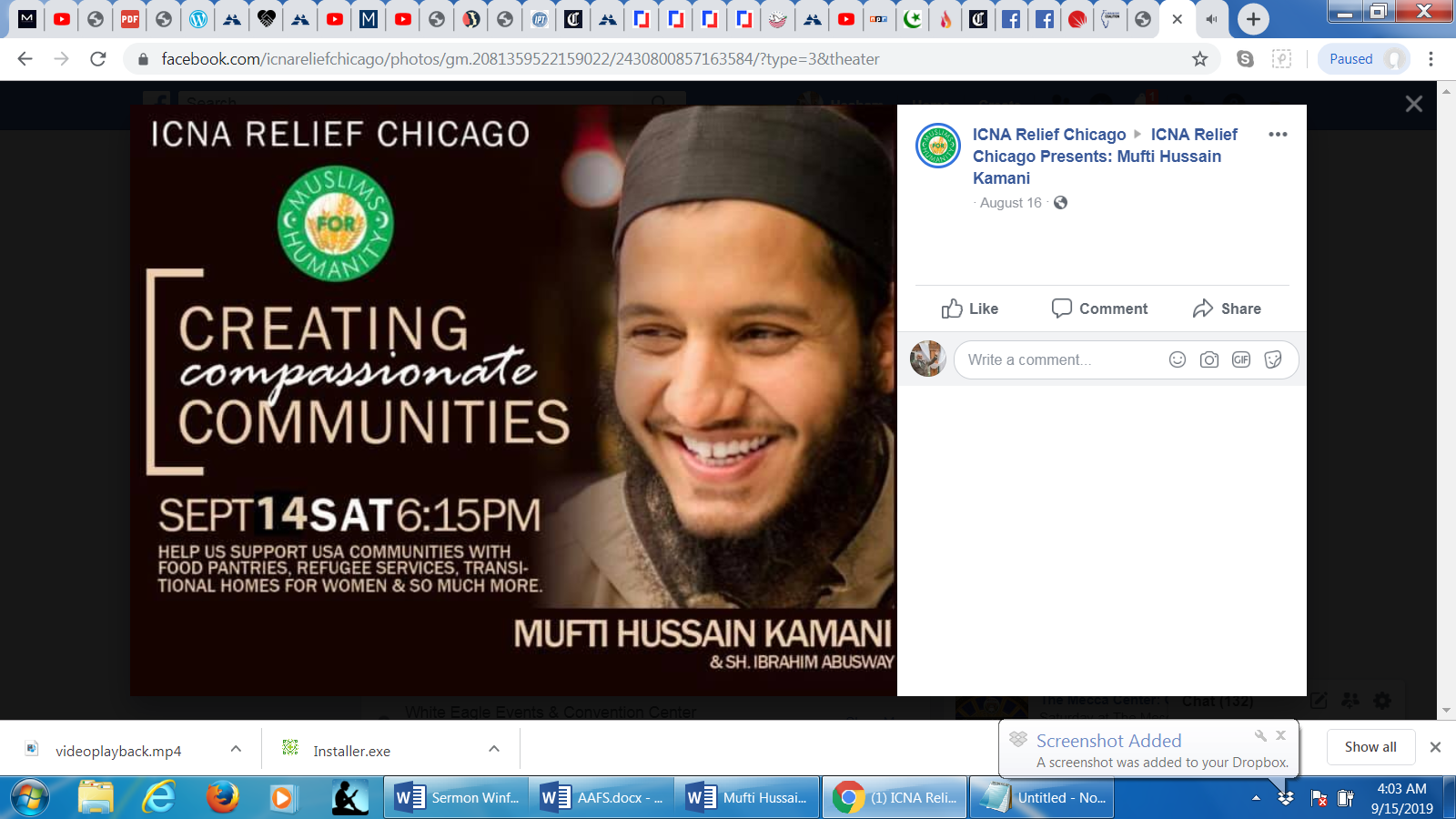 Kamani has a long history of misogynistic and violent statements, including condoning wife-beating in Islam and sex slavery. During a talk on “Rights of a Wife in Islam,” Kamani explains “how to deal with the women folk” and how Muslim husbands can “train their wives.” Beating women, Kamani advises, should only be a “last measure.”

In addition, in a pamphlet titled, ‘The Prophetic Code,’ published by the Qalam Institute, Kamani cites Quranic verse and commentary, in which he tells Muslims: “do not resemble the Jews.” Parents are also advised to “beat” their children “if they do not [pray].” Kamani has also glamorized Palestinian terrorism, asking God to “reward the martyrs of Palestine.”

Kamani’s appearance before ICNA Relief Chicago comes as no surprise to those familiar with the group’s history.

ICNA has been identified as a front for Jamaat-e-Islami, a South Asian Islamist group with ties to terrorism. The group’s armed wing, Hizbul Mujahideen is a U.S.-designated terrorist group.

In February of this year, Rep. Jim Banks (R-Indiana) introduced House Resolution (H.RES.) 160 calling on all relevant U.S. agencies to halt ties to the international and domestic affiliates of Jamaat-e-Islami, including ICNA and ICNA Relief.

According to H.Res. 160, Jamaat-e-Islami poses a threat to democracy and human rights, including historic ties to a horrific genocide. The resolution notes:

“When Bangladesh achieved independence in 1971 and established a secular democratic state, the approximate cost was 3,000,000 deaths, more than 10,000,000 displaced, and 200,000 women raped, many at the hands of Islamist militants led by Jamaat-e-Islami who helped the Pakistani army murder Bangladeshi independence activists…”

One of ICNA’s founders and early leaders, Ashrafuzzaman Khan was convicted in a Bangladesh war crimes tribunal for his role in leading Al-Badr militia, which carried out the mass murder of Bangladeshi intellectuals during the war.

Nor was Mufti Kamani the only ICNA Chicago co-speaker with disturbing Islamist ties. Joining Kamani was Sheikh Ibrahim Abusway, ICNA Relief Maryland’s Outreach Manager. In 2004 Abusway served as the community affairs coordinator for the Council on American Islamic Relations (CAIR). CAIR was named an unindicted co-conspirator in the terror-finance trial against the Holy Land Foundation and its former officials in 2008. U.S. government officials have stated that the evidence, “demonstrated a relationship among CAIR, individual CAIR founders, and the Palestine Committee” an organization established by the Muslim Brotherhood to support Hamas.

Abusway later served as a development coordinator for KinderUSA, a charity with alleged ties to the U.S.-based Hamas finance network according to terrorism analyst Matthew Levitt. Levitt, author of Hamas: Politics, Charity and Terrorism in the Service of Jihad as unsuccessfully sued by KinderUSA over the allegation.

Inviting hate clerics like Kamani and Abusway does not create compassionate communities. Instead, ICNA and its affiliates like ICNA-Chicago are wolves in sheep’s clothing and should be judged on the records of individuals they promote and employ. Interfaith meetings and public relations campaigns should not fool Americans about the role ICNA and its affiliates play in undermining the freedoms and human rights both in the West, and throughout South Asia. Resolutions like Rep. Bank’s H.RES 160 are playing an important role in educating the public about the detrimental role played by Islamists abroad, and their supporters here.

Hesham Shehab is the Chicago Associate for the Counter-Islamist Grid.