Even with just over 60 days left in power, this administration has set three more execution dates.

Opinion: William Barr and the politics of death

by: Paul O’Donnell (Shane Claiborne)
Nov. 18, 2020 (RNS) — This week the United States will pass a quarter of a million lives lost to coronavirus, even as our courageous nurses and doctors risk their own lives to try to save other people. Every loss is wrenching. While this is going on, the Trump administration is going out of its way to bring more death in the middle of the death by carrying out federal executions amid the pandemic.

Until this year, the United States went 17 years without a single federal execution. In 2020, in the middle of a pandemic, we have had more executions than in the past 50 years combined.  No president, Republican or Democrat, has executed this many people since Harry Truman was in the White House. And even Truman didn’t kill this many people in a single year.

Even with just over 60 days left in power, this administration has set three more execution dates.

Some televangelists and religious pundits sing the praises of Donald Trump as a pro-life president, citing his appointment of anti-abortion judges, but the rash of federal executions is one more reminder that Trump and Attorney General William Barr are anything but pro-life.

Barr, a professing Catholic, was given an award at the National Catholic Prayer Breakfast in September. He executed someone the day before and the day after receiving the award. No one missed the irony. As Krisanne Vaillancourt Murphy, executive director of Catholic Mobilizing Network, said, “With this award for Mr. Barr, the ‘National Catholic Prayer Breakfast’ has become a twisted halftime show between executions.”

The three upcoming executions are one more reminder of how broken the system is.

Orlando Hall is set to be executed on Thursday (Nov. 19). An African American man convicted by an all-white jury in a trial riddled with racial bias, he is one of 22 African American inmates on federal death row — out of 54 men in all. That’s about par for death row prisoners nationwide: Though African Americans make up about 12% of the U.S. population, they account for nearly half of our death row population and over a third of our executions.

One of the clearest determinants of who gets the death penalty is not the atrocity of the crime, but the race of the victim. In a bombshell new study on racial disparities, the Death Penalty Information Center noted that even though about half of all murder victims are African American, 80% of new death sentences in 2019 were imposed in cases where the victim was white.

We are not executing the “worst of the worst,” as some may believe, but the poorest of the poor, and disproportionately people of color. It is precisely the states that held onto slavery the longest, furthermore, that continue to hold onto the death penalty. The federal government would rather go backward than forward.

The next person scheduled to die after Orlando Hall is Lisa Montgomery, the only woman on federal death row and the first woman in nearly 70 years to be executed by the United States. A victim of rape by a family member, Montgomery was pressured at age 17 into an engagement with her stepbrother and was forcibly sterilized. She nevertheless takes full responsibility for the her horrific crime and is being treated for mental illness and trauma after her life of sexual and physical abuse.

It’s sickening to think that the best we can think of doing as a nation is to kill her, yet not only is that the plan, but the feds gave her only 54 days’ notice before her execution — the normal period is 120 days, to allow for appeals. Both of her lawyers have now tested positive for COVID-19 as a result of travel related to the execution’s rushed timing.

On Dec. 10, two days after Montgomery’s scheduled execution, Brandon Bernard will face execution for a crime he was convicted of when he was 18 years old, in a trial tarnished by prosecutorial misconduct, including concealing vital information from jurors.  A majority of the surviving trial jurors now say they don’t want that death verdict carried out.

More than 10,000 bishops, pastors and people of faith have signed a petition to stop these executions.

This recent surge of federal executions goes against the trend in the states, which have been moving steadily away from the death penalty.  Half of the 14 executions in 2020 were carried out by the federal government.

We’ve hit a tipping point, and we are likely to be the generation to end the death penalty.

If so, the United States would join 106 other countries, more than half the world, that have abolished the death penalty — up from 16 in 1977.  As it is, the U.S. government finds itself in the company of China, Iran, Saudi Arabia, Vietnam and Iraq, the five deadliest countries in the world when it comes to executions. The U.S. is No. 7.

Let’s dedicate ourselves to getting on the right side of history. Let’s do all we can to stop these last three executions of 2020. Let’s tell Barr that our values and our politics should point toward a future with less death, not more.

(Shane Claiborne is an activist, author and co-director of Red Letter Christians. The views expressed in this commentary do not necessarily represent those of Religion News Service.) 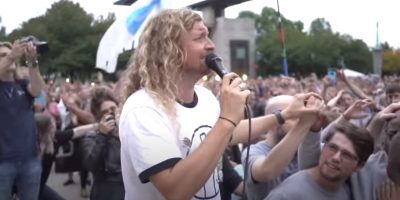