If a new number isn’t set by Wednesday (Sept. 30), no refugees will be admitted to the U.S. until the Trump administration's determination of the limit is made.

by: Emily McFarlan Miller
Sept. 28, 2020 (RNS) — Days before the deadline for the federal government to set its annual limit on the number of refugees that can be admitted to the United States, the Trump administration has not yet proposed that number, according to Lutheran Immigration and Refugee Service, the largest faith-based organization in the U.S. dedicated to serving immigrants.

If a new number isn’t set by Wednesday (Sept. 30), no refugees will be admitted to the U.S. until the Trump administration’s determination of the limit is made.

More than 200 clergy of the Evangelical Lutheran Church in America, the country’s largest Lutheran denomination, are asking the administration to raise that number to at least 95,000 in the 2021 fiscal year, which begins in October.

Meanwhile, of the 18,000 refugees approved by the administration for the current fiscal year, a historic low, only 10,845 have been settled in the U.S.

“Our nation’s once pristine reputation as a place of refuge for the oppressed and persecuted of all faiths has been gravely damaged,” LIRS President and CEO Krish O’Mara Vignarajah said in a written statement.

Vignarajah, a former refugee from Sri Lanka, said she questioned if her family would be welcomed to America today “were we fleeing the ethnic and religious persecution that drove us from our home.”

At the time, each determination was the lowest number of admissions a president had set since the refugee resettlement program started in the 1980s.

As of the end of 2019, about 79.5 million people had been forcibly displaced from their homes, or about 1% of the world’s population. Among those, 26 million were considered refugees, according to the United Nations High Commissioner for Refugees.

Last week, LIRS leaders and 243 clergy in the Evangelical Lutheran Church in America sent a letter to Trump and Secretary of State Mike Pompeo expressing support for refugee resettlement and requesting the United States admit at least 95,000 refugees in fiscal year 2021.

That’s “a testimony to the Lutheran faith values to love our neighbor, accompany the vulnerable, and welcome the stranger,” according to the letter.

ELCA congregations have assisted refugees with housing, language, employment and social supports necessary for their integration into our communities since the 1980s, the letter said. But their ability to do so depends on the “moral leadership” of the government.

“As people of faith, we believe that we must honor the dignity of every human, regardless of national origin. We have a commitment to follow the teachings of Jesus and to uphold our nation’s tradition of protecting the persecuted,” the letter reads. 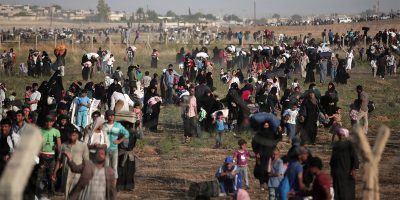 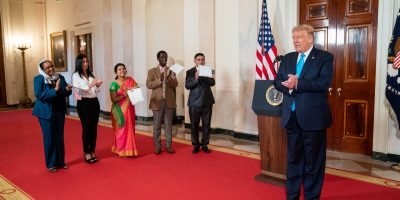