by: Paul O’Donnell
Jan. 2, 2020 (RNS) — Back in the 1900s, before cellphones and email and the internet were a thing, when George H.W. Bush was in his final year as president, I headed to college. I had moved from East Tennessee to Philadelphia to go to Eastern University, a little Christian college known for holding together faith and social justice.

As I settled in and began studies, I kept hearing about a guy named Bryan Stevenson, an Eastern alumnus, class of 1981, who was doing some pretty amazing things with his life.

Bryan was a bit of a legend at the university, and his story had already been told and retold to me by our mutual friend and professor, Tony Campolo, a well-known preacher who has a reputation for “remembering big.”

But it turns out Bryan’s life is as big as the story Tony remembered. Bryan turned it into a book, and now a film, titled “Just Mercy,” which opened on Christmas and stars Michael B. Jordan, Jamie Foxx and Brie Larson.

Bryan went from our alma mater in Philly to attend Harvard Law School, where he graduated with honors. Immensely gifted and with a Harvard degree, he could have gotten a job with pretty much any firm he wanted, and name his salary.

Instead, Bryan headed to Alabama, where the residue of slavery is so clearly visible in a criminal justice system that enshrines racism. He moved into a one-room apartment in Montgomery “with nothing but a soccer ball” (according to our friend with the tendency to remember big) and started defending people on death row. 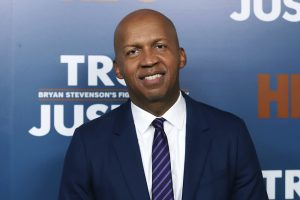 Particularly urgent for Bryan were the cases of those who were wrongfully convicted, often because of the color of their skin.

He was not only looking out for the prisoners, but for the system that they had been caught up in. One of the first quotes I ever heard from Bryan was this one: “We have a justice system that treats you better if you are rich and guilty than if you are poor and innocent.” He sought to ensure that “equal justice under the law” was not just an aspirational slogan inscribed on the Supreme Court, but became a reality.

In 1989 he founded the Equal Justice Initiative in Montgomery, which has now helped save the lives of over 125 men on death row and in 2018 opened the Legacy Museum and National Memorial for Peace and Justice, known as the National Lynching Memorial.

His TED Talk got the longest standing ovation in the history of TED Talks and has been viewed over 6 million times. South African Archbishop Desmond Tutu called Bryan “America’s Nelson Mandela.” Time magazine recognized him as one of 100 most influential people. There were even whispers that someday Bryan might be a justice on the Supreme Court.

The more I learned about Bryan, the more his decisions made sense. He had grown up in segregated public schools and steeped in the historic black church, where liberation and justice flow like baptismal waters. (At Eastern, he had directed the gospel choir.) Early in his career, as he arrived to defend a young white man at trial, he was scolded by the judge who said only “counsel” were allowed in the courtroom.

For many, Bryan Stevenson is a superhero akin to the Avengers fittingly played onscreen by the actor who played Erik Killmonger in “Black Panther.” Jordan has said he was intimidated when he first met Bryan.

Eventually, I got to meet Bryan, and for the past 10 years it has been an honor to call him a friend. He inspired me to write “Executing Grace,” my book on the death penalty, and helped me to craft it. Bryan has been a mentor not only in justice, but also in hope. Indeed, nearly every time Bryan speaks, he talks about “protecting our hope,” a precious, timely message. In his words, “Hopelessness is the enemy of justice.” 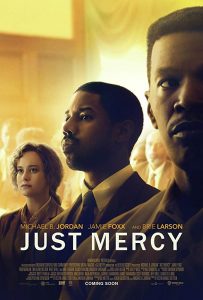 “Just Mercy” is not a film about a man. It is about a movement to heal the wounds of racism and hatred. More than knowing his name, Bryan wants people to know the names of the 4,000 African Americans lynched as victims of racial terror and too often forgotten — people like Mary Turner, who was eight months pregnant when she was hung upside down by a white mob, set on fire and even cut open so her baby could be stomped to death.

He wants people to know the name of George Junius Stinney, who died in the electric chair at the age of 14, convicted by an all-white jury that deliberated for 10 minutes after a trial that lasted less than two hours with no witnesses called and no defense presented, no physical evidence — and whose sentence was vacated 70 years after his execution.

Bryan wants people to know the name of his friend Anthony Ray Hinton, who survived over 30 years on death row for a crime he didn’t commit, one of over 160 wrongfully convicted survivors of death row. Bryan wants us to know their names, not his.

He wants America to know the names of the casualties of racial terror throughout American history, and those who are next in line to be those casualties, as 1 in every 3 black boys born today can expect to go to prison.

During the filming of “Just Mercy,” I was invited on set to watch a scene being shot in an abandoned prison in Georgia. At one point a bitter white corrections officer throws a prisoner against a wall. Undaunted, the man smiles with a defiant hope, eyes set on heaven, and begins singing an old hymn: “I’m pressing on the upward way, new heights I’m gaining every day, still praying as I’m onward bound, Lord, plant my feet on higher ground.”

Later, I got to meet a bunch of the actors, including the man who played the correctional officer. He smiled when I mentioned how good he was at being bad. As we ate, I saw an image of the world Bryan is building: prison guards and death row inmates talking and laughing over lunch. It was a world in which each of us is more than the worst things we’ve done. Where if we have the courage, we can see past the costumes we wear and get to know each other as children of God, and we can recognize and celebrate the dignity of every person.

Please watch “Just Mercy”  with this in mind. Don’t just munch your popcorn and go home talking about what a hero Bryan is. Doing so dismisses what Bryan is really about because it lets you off the hook. Walk away from “Just Mercy” dreaming and scheming about the hero you want to be.

(Shane Claiborne is the author of “Executing Grace: How the Death Penalty Killed Jesus and Why It’s Killing Us.” The views expressed in this commentary do not necessarily represent those of Religion News Service.)

This story has been corrected. An earlier version incorrectly said that Michael B. Jordan played Black Panther in the 2018 movie.