The product of five years of research... 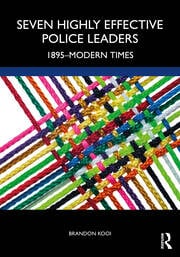 Kooi said, “‘Seven Highly Effective Police Leaders’ teaches important history, highlighting the impact on the evolution of American policing by academia and social science. Each historical biography demonstrates the importance of each leader’s decision-making and how it continues to shape the future of U.S. law enforcement.
“Readers are informed about each police leader’s background and how their leadership was shaped by the political and historical environments in which they led. The book is useful for educational courses in policing, American history, leadership, and strategic planning.
“Additionally, the general public will find this book insightful regarding contemporary mass social justice protests linked to the unique history of the United States.“
Hardbound editions are $128, paperback editions are $34.36.

Kooi has worked with the Aurora Police Department and received the Herman Goldstein Award for problem-oriented policing at the 2018 Stockholm Criminology Symposium.
He earned a doctorate in criminology at Michigan State University and master’s and bachelor’s degrees in criminal justice from Illinois State University.