Fred Rogers’ widow shared churchgoing traditions and a love for music with her husband...

by: Adelle M. Banks
Nov. 15, 2019 (RNS) — At “91 and a half,” Joanne Rogers remains a devoted advocate for the legacy of her late husband, the iconic star of the long-running children’s show “Mister Rogers’ Neighborhood.”

Fred Rogers’ widow shared churchgoing traditions and a love for music with her husband, whose story is depicted in the new movie, “A Beautiful Day in the Neighborhood.”

The film, set to release Nov. 22, stars Tom Hanks and depicts the friendship that developed between Fred Rogers and Tom Junod, a journalist who profiled the TV luminary in Esquire magazine.

RELATED: The surprising success of ‘Won’t You Be My Neighbor?’

Joanne Rogers continues to attend Pittsburgh’s Sixth Avenue Presbyterian Church, the congregation where she worshipped with her husband, who was ordained by the Presbyterian Church (USA) in 1963 and died in 2003. The former longtime professional pianist recalls that beyond making TV his mission, her husband — who majored in music before attending seminary — was “a very fine pianist” who shared his talent with her at home.

“I had a lot of two-piano literature, and so, when Fred and I would have a chance, we’d sit down and sometimes I’d make him play the other part,” she said, “so that I could practice a little, and he would do that. Had a good time at two pianos.” 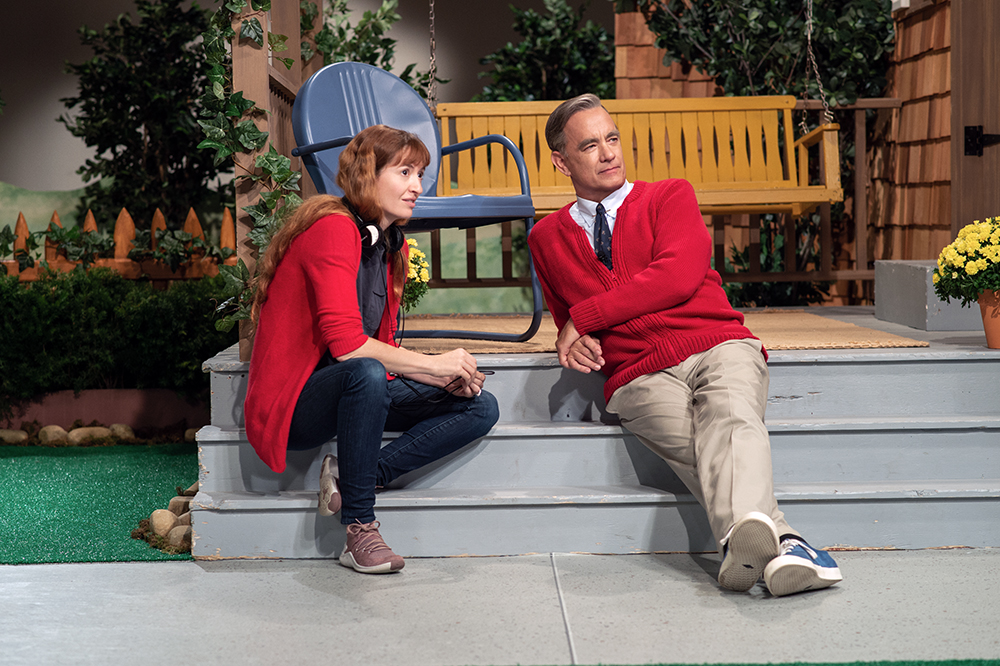 Director Marielle Heller, left, and Tom Hanks on the set of TriStar Pictures’ “A Beautiful Day In The Neighborhood.” Photo by Lacey Terrell ©2019 CTMG, Inc. All rights reserved.

You have said that your husband used to say the space between the television and the person watching it was “holy ground.” Did you see his show as a form of ministry?

Absolutely. That’s a yes. It was what he was ordained to do. That was the command from the ordination, to be ordained as an evangelist and continue his work in television and the media with families and children.

But he never mentioned his faith explicitly, that I’m aware of, on the show. If so, why not?

He wanted to be inclusive, and there are many, many people you would exclude if you start mentioning one God, one faith. That was the reason for it. I think that he acted his faith, always, as much as he possibly could. He worked very hard at doing that. He worked very hard at being the person that he was, and he could act his values and his faith.

In the movie, Maryann Plunkett, the actress depicting you, said, “We don’t call him ‘Mr. Rogers’ at home” and Tom Hanks, playing your husband, mentioned that at least one of his sons was reluctant to tell his friends who his father was. Was it hard for you sometimes to be the other parent of the children of Fred Rogers? 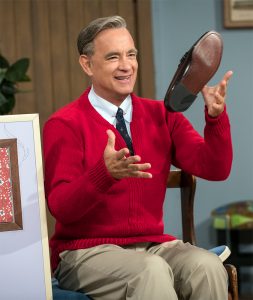 I was used to it. (laughs) I got a lot of practice doing that and I hope I was understanding of it, probably never as understanding as I might have been. But the fact was that my oldest son went to college and never said what Rogers he was until his dad came to visit him. But he just is a type who doesn’t like to bring attention to himself that much. He likes to have his privacy, yet he’s still very outgoing.

The movie depicts Fred Rogers reading Scripture and praying for people by name. Did these practices develop because of his church experience or in some other way?

I don’t know how they developed. I suspect because he was a churchgoer from early childhood, I think. His parents were, and they all went to church, and he was very much a Presbyterian growing up.

But the praying for people by name and reading Scripture were things he did?

He did that every morning. He was a person who really liked schedules. He liked to know what he was going to be doing, and he wrote a song for the program called “I Like to Be Told.” And he really liked that. So first thing in the morning — and that means maybe about 5:15 or so — he prayed in his room. And he had a legal pad with all the names on it that he wanted to remember.

Can you talk a little bit more about his church experience? Did he go to service regularly and if so, where?

He went to church regularly, and it changed around somewhat. He would go, maybe if a friend was gonna be at a church. He didn’t have to go to the same church, but he did go most regularly to the Sixth Presbyterian Church in Pittsburgh. 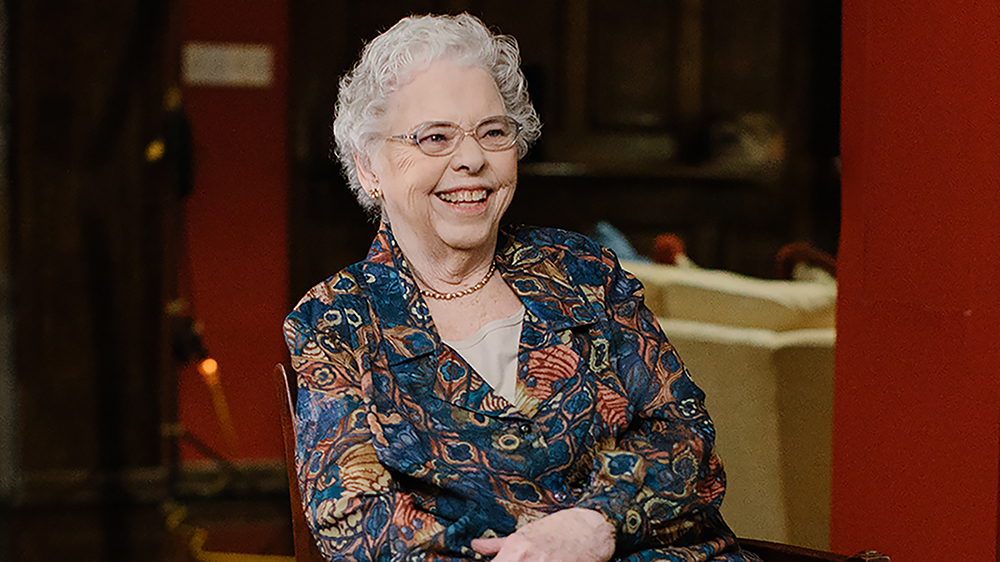 Your character in the movie notes that Mr. Rogers is not a living saint, and he’s not a perfect person. Is that what you would actually say about him? How would you describe him?

I would describe him as a loving, hard-working person.

I think you can admire the way somebody handles something, and Fred did a wonderful job of handling death as part of life. 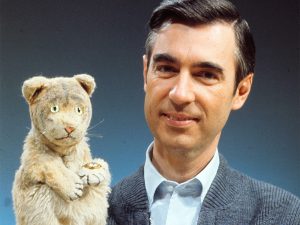 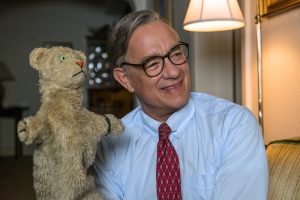 What do you think of Tom Hanks playing your husband?

First, what I think of Tom Hanks doing the part: superb. I think someone said Tom Hanks just disappears into the person he’s trying to present. And I think that he’s amazing. I say, thank you God, they got him.

The movie depicts your husband as someone who asked for prayer for himself. Did he ask you to pray for him?

It’s more complex than that. He would ask people who were very disabled, challenged. He would ask those people to pray for him. And, Tom Junod, who was the real journalist in the story, asked him: “Oh, are you doing that just because you want to make them feel good?” And he said, “Oh, oh, not at all. Not at all. I just feel that people who have gone through as much as they have are very close to God.” 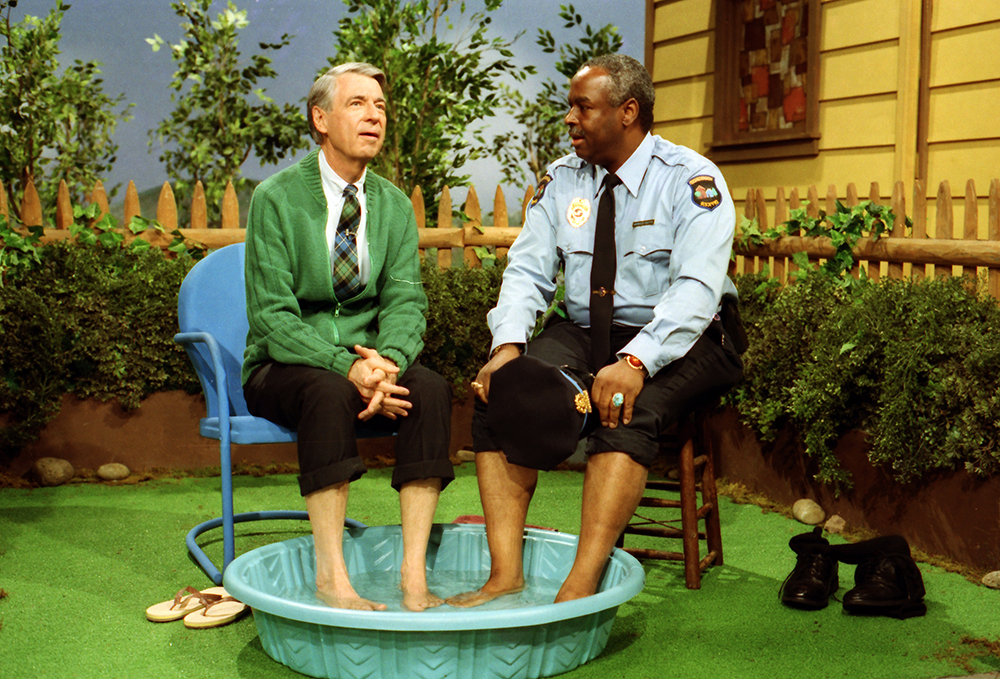 « MOVIES: A Beautiful Day in the Neighborhood (Previous News)
(Next News) Opinion: Sex scandals show why evangelicals need to recover the sacrament of confession »