The film focuses on an eclectic group of about 100 homeless citizens who occupy the main Cincinnati library after closing hours...

By Tom Siebert
KENDALL COUNTY, Ill., April 20, 2019 – For the past four years, I have had the high but humbling privilege of writing about the area’s homeless community and those with huge hearts for helping them.

But for the grace of God, as well as the generosity of family and friends, I would be writing about homelessness in the first-person singular tense.

This issue hit home locally when Emilio Estevez––the writer, director, producer, and star of “The Public”––screened his new film last month to residents of Aurora’s Hesed House, the second-largest homeless shelter in Illinois, at the Cinemark Tinseltown USA movie theater in North Aurora. 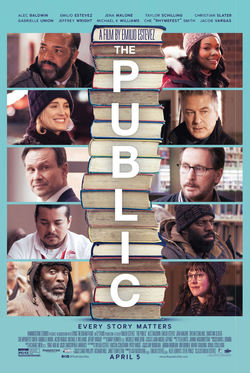 “The Public” is a bold, brilliant movie that touches on several hot-button topics of our time: policing, dirty politics, fake news, mental illness, the opioid crisis, and the occupy movements.

But this educating and entertaining film is mostly about the homeless, writ large and lengthily.

Mr. Estevez, who inherited the social conscience of his father, actor-activist Martin Sheen, demonstrates that when it to comes to homelessness, he gets it––and gets it right.

For the past nine years, Kendall County PADS has been providing its local homeless guests with nutritious meals, overnight housing, and access to social services during the six colder months of the calendar.

“The Public” perfectly depicts the challenges that our PADS guests face on a day-to-day basis.

The film focuses on an eclectic group of about 100 homeless citizens who occupy the main Cincinnati library after closing hours, during a record-breaking cold night when all the city shelters are full.

Similarly, the public libraries in Oswego, Montgomery, and Yorkville are often havens for the homeless. They read books, newspapers, and magazines, in addition to using the computers to seek employment or connect with families or friends. And during the recent harsh winter, many area public buildings became warming centers.

In the movie, the homeless ride the Cincinnati Metro trains, sometimes with no particular place to go but to escape the cold.

In sprawling Kendall County, which has no public transportation, PADS partners with private transit firms to take guests to and from its seven shelter sites, and back and forth from their jobs for those who have them.

During two subfreezing nights last winter, Kendall Area Transit was forced to shut down. However, KAT kept its PADS routes open, so the guests would not have to walk in the big chill.

Addiction is also a major factor, as personified in the movie by Jackson, actor Michael Kenneth Williams, who is shown openly drinking alcohol in the occupied library.

Others suffer from emotional challenges like Big George, poignantly portrayed in the film by Chicago rapper-philanthropist Che “Rhymefest” Smith.

In “The Public,” Mr. Estevez plays bleeding-heart librarian Stuart Goodson, who is reminiscent of Anne Engelhardt, the executive director of Kendall County PADS. Anne knows every shelter guest by name and need.

Mr. Goodson tries to give Jackson money and even gives Big George the eyeglasses off his face so that he can stop seeing “lasers” and see his way out of the sit-down situation.

Much of “The Public” centers on the police riot response to the library siege, with Alec Baldwin playing crisis negotiator Bill Ramstead, who is simultaneously searching for his own missing, opioid-addicted son among the homeless.

Locally, Kendall County law enforcement works closely with the homeless. Sheriff Dwight Baird is a member of the PADS board of directors.

Sheriff’s deputies could arrest homeless citizens for vagrancy but they instead give them the option to be taken to a PADS site. The sheriff’s department also handles PADS’ laundry, having it washed at the county jail.

In the movie, the TV news media wrongly reports that the peaceful demonstration is a hostage crisis. Members of the Cincinnati community bring bags and boxes of food to the area outside the sieged library.

That outpouring of kindness is matched by the Kendall County Food Bank, which partners with PADS, as well as area residents who donate clothing, hygiene items, and other supplies to our temporary shelters.

Finally, just as we do not know the ultimate fate of the homeless in “The Public,” we don’t know where many of our PADS guests will go when the shelter season ends this Saturday.

The hope is they will find permanent places to live before the sites re-open in mid-October, but if they don’t, Kendall County PADS will be there for them.

« Holy Week services go on in Paris despite Notre Dame fire (Previous News)
(Next News) Gallup: Number of Americans who belong to a church or house of worship plummets »