A new survey by the California-based Christian research firm found that Protestant pastors are worried less about hot topics...

by: Emily McFarlan Miller
Feb 10, 2020 (RNS) — What’s on pastors’ minds? It may not be what you think, according to a report released last week by Barna Group.

A new survey by the California-based Christian research firm found that Protestant pastors are worried less about hot topics like religious liberty than they are about the decline of religion in America.

The report is the first of a series of monthly releases from Barna Group’s State of the Church 2020 that will analyze how Christianity in the United States has changed and where it is headed, President David Kinnaman said.

It’s the first time in 10 years that the research firm has publicly released the data from its annual State of the Church survey.

I felt like we’d been learning a lot over the past 10 years that allows us to more clearly communicate the big cultural trends that are taking place and what they mean for the church,” Kinnaman said.

According to the report, three-quarters (72%) of Protestant pastors identify the impact of “watered down gospel teachings” on Christianity in the U.S. as a major concern. That’s especially true for pastors in non-mainline denominations (78%). Mainline pastors (59%) are less concerned.

About two-thirds (66%) of pastors say a major concern for Christianity is “culture’s shift to a secular age,” followed by 63% who identified “poor discipleship models” as a major concern and 58% who named “addressing complex social issues with biblical integrity,” the survey says. 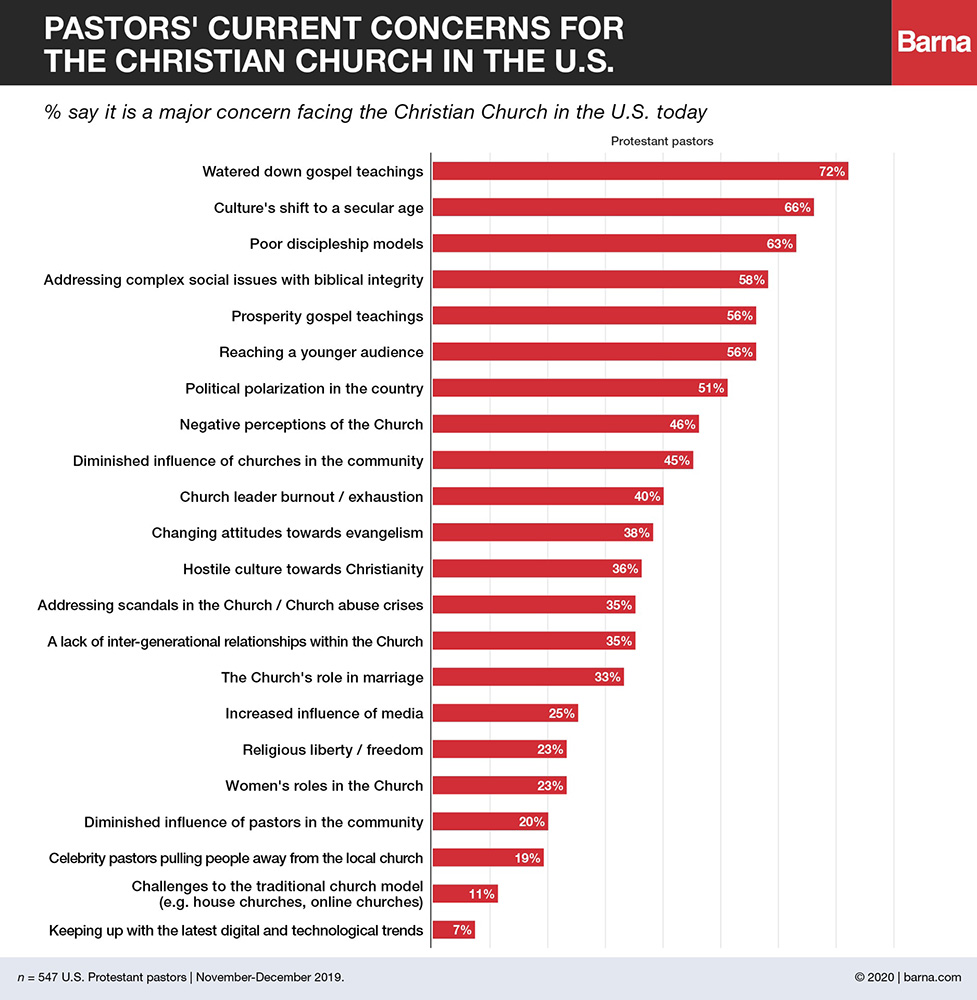 “Pastors’ Current Concerns for the Christian Church in the U.S.” Graphic courtesy of Barna

In their own churches, most pastors reported that the major concerns they face are “reaching a younger audience” (51%) and “declining or inconsistent outreach and evangelism” (50%), according to the report.

What doesn’t worry pastors very much: religious liberty — the stuff of Supreme Court cases, executive orders, campaign promises and a recent task force and summit. Only 23% of Protestant pastors identify it as a major concern or issue facing the Christian church today in the U.S., and 32% said it was not a concern or issue at all, according to Barna Group data.

Other issues low on pastors’ list of major concerns include keeping up with technology and digital trends (7%), online churches and other challenges to the traditional church model (11%), “celebrity pastors pulling people away from the local church” (19%), the declining influence pastors have in their communities (20%) and the role of women in the church (23%).

Barna Group’s survey also includes a small group of Catholic priests — not enough to be nationally representative, according to the research firm — who also place increasing secularism at the top of their concerns for the church nationally (along with addressing scandals and the abuse crisis in the Catholic Church and reaching a younger audience) and reaching a younger audience for their parishes.

The research firm also is launching tools that allow churches to survey their own members. Kinnaman said it felt “more important than ever to give churches the opportunity to see the state of their church” — not just of the church, or Christianity, in general.

“There’s so much information about big, broad trends. In order for trends to be relevant, they have to be contextual,” he said.

Data in the first report of the State of the Church 2020 is based on 547 interviews with Protestant senior pastors on Barna’s PastorPanel conducted online between November and December 2019. The sample error is plus or minus 4.1 percentage points, according to Barna Group. 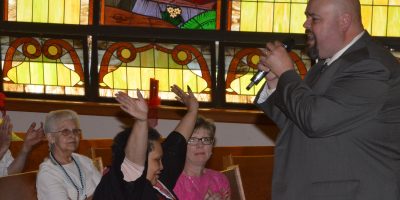