WASHINGTON, D.C., Sept. 10, 2019 — A former ambassador, a faith leader, an advocate and a former refugee called for robust refugee resettlement on a press call today, and underscored why admitting more refugees is in line with the country’s values and best interest. 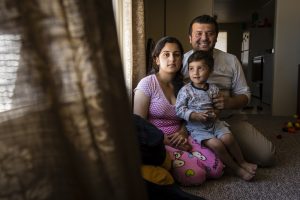 The statements come as the White House considers future refugee resettlement, including a potential refugee admission cap as low as zero for fiscal year 2020.

The following are quotes from speakers on today’s call:

Ryan Crocker, diplomat in residence at Princeton University and former U.S. ambassador to Afghanistan, Iraq, Pakistan, Syria, Kuwait and Lebanon:
“How we lead, the example we set, is extremely important globally: If we are seen as stepping up to the challenge, others are likely to do the same. If we don’t, an already desperate humanitarian crisis will get worse. To shut down refugee admissions frankly would be a repudiation of what America is all about. Refugees are us. They always have been in this country. This is about American values and this is about American security.”

Gideon Maltz, Executive Director of the Tent Partnership for Refugees:
“We are deeply concerned by the U.S. government’s intention to cut even further the number of refugees admitted into the country. While the United States resettles refugees primarily for humanitarian and strategic reasons, refugees also bring considerable economic and business benefits. Not only do they fill jobs in a tight labor market, they are some of the most dedicated and motivated workers in the U.S. workforce. They also have higher than average rates of entrepreneurship and have founded some of this country’s leading tech companies. Fundamentally, refugees return more to the economy than they take — and the United States stands to lose greatly by continuing to cut their numbers.”

Arooj Nirmal, a former refugee who lives in Spokane, Washington, and is waiting to reunite with her husband:
“I left my country in 2013 because I was being persecuted as a Christian in Pakistan. My husband and I have been separated for a really long time, and all I have is faith in God that He will make it possible for us to see each other someday soon. I am happy to be in and honored to serve this wonderful country.”

Read more on immigration at… https://xpian.news/category/immigration/