by: Jack Jenkins
WASHINGTON, Aug. 25,2020 (RNS) — More than 300 faith leaders have signed a letter addressed to delegates to the Republican National Convention and President Donald Trump demanding the commander in chief end immigration policies they argue are “inhumane.”

“Our sacred texts challenge us, first and foremost, to love our neighbor, and welcome the sojourner among us,” the letter reads. “These values are not reflected in your platform; this sacred calling is not what we see on your agenda. As you enter your convention, you have the power to put forward a new policy approach. We urge you to remember that we, as a nation, have the responsibility to be the City on the Hill, and the policies we create should reflect those values by treating immigrants with the respect and dignity we all deserve.”

The letter specifically decried the detention of migrant children and the separation of migrant families, the latter of which triggered widespread backlash in 2018 when the Trump administration adopted a “zero tolerance” policy that wrenched many migrant families apart. Although that policy encountered numerous legal challenges, some migrant parents have still been separated from their children or ended up in facilities plagued by COVID-19 outbreaks. Meanwhile, migrants who have arrived since the beginning of the novel coronavirus pandemic have been subjected to a mass expulsion policy.

Signers of the letter, which was organized by the liberal religious group New Moral Majority PAC, include a number of liberal-leaning religious activists such as the Rev. Robyn Henderson-Espinoza, a theologian and author of “Activist Theology”; the Rev. Katey Zeh, CEO of the Religious Coalition for Reproductive Choice; Jonathan Wilson-Hartgrove, an author and activist; Shane Claiborne, co-founder of Red Letter Christians; Guthrie Graves-Fitzsimmons, fellow at the Center for American Progress’ Faith and Progressive Policy Initiative; and the Rev. Noel Anderson, a longtime immigrant rights activist and co-founder of New Moral Majority.

“Our nation has always been a haven and sanctuary to those in need,” said the Rev. Elizabeth Shank, a pastor in La Crosse, Wisconsin, and one of the signers of the statement. “To be a nation under God, we need to care for all of God’s children, no matter where they may be from.”

The letter is one of several initiatives launched by liberal religious groups in recent weeks, with some religious organizations even teaming up with secular groups to criticize the Trump administration ahead of the November election. 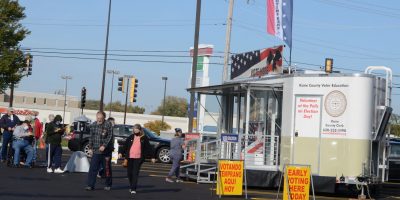 Because of the pandemic, donations of winter clothes did not roll in as usual overRead More