Biden quotes Bible at Black church meeting, while Trump says his rival is ‘against God’

by: Jack Jenkins
Aug. 6, 2020 (RNS) — On Thursday afternoon (Aug 6), President Trump declared in Cleveland that his Democratic rival, former Vice President Joe Biden, would create an America with “no religion” if elected, adding that Biden would “hurt the Bible, hurt God” because “he’s against God.”

Yet Biden spent that same morning invoking Scripture while speaking directly to religious voters, particularly Black Protestants who make up a core part of the Democratic Party’s base.

“This convention was brought together in the heat of that same struggle: to be a voice of challenge and change, a rock of faith and hope, and a home for the drum majors of righteousness,” Biden said.

Biden, a Catholic, then cited Scripture while outlining the litany of issues facing the U.S., arguing there is hope for overcoming them.

“The Psalm tells us that ‘weeping may endure for the night, but joy cometh in the morning,’” he said. “There’s no question about that. The night feels endless right now — exhausting, heartbreaking, impossible to endure. When the words, ‘I can’t breathe,’ echo in our national conscience. When the brunt of every crisis — of illness, violence, injustice, economic hardship — falls once more hardest on Black shoulders. The night is long, but joy cometh in the morning, and it’s up to us to make sure it does. That’s our charge: deliver America a new dawn.”

He then referenced another Bible verse: “We have to dedicate ourselves anew, as John (Lewis) did. … Let’s remember the Lord’s words and the apostle Paul in Second Corinthians: ‘My grace is sufficient for thee. My strength is made perfect in weakness.’ Thank you for your purpose and your faith.”

RELATED: Joe Biden on restoring the soul of our nation

Clyburn encouraged listeners to vote in November and recalled that his father, a pastor, kept three books in his pulpit: a Bible, a hymnal and a list of every registered voter in his precinct.

“I believe this will be the most consequential election for people of color since the election of Abraham Lincoln,” said Clyburn. “And if we fail to get the right result this year, we will see the clock turned back on all that we’ve sacrificed for over the years.”

Biden also addressed the virtual convention of the National Association of Black Journalists and National Association of Hispanic Journalists earlier in the day, where he said as president he would insist people refrain from holding large gatherings in places heavily impacted by the ongoing pandemic caused by the novel coronavirus — an issue facing many religious communities as they grapple with whether to hold in-person worship.

“If I were president today, I would roll back the reopenings in a number of places,” he said. “It’s clear masks and social distancing make a gigantic difference in terms of the spread of this disease. It’s simple. It’s factual. It’s real. And everyone, wherever there is a significant percentage of people with COVID, should be required to keep social distancing and masks. Bars should not be open. There should not be congregations of more than 10 people.”

Asked at the event how he would confront China regarding reports of widespread human rights abuses against Uighur Muslims, such as forcing them into re-education camps, Biden said: “We should be in the United Nations condemning China’s action. They’re concentration camps.”

Biden campaign spokesman Andrew Bates issued a statement to CNN Thursday afternoon refuting Trump’s remarks about Biden and religion, saying, “Biden’s faith is at the core of who he is.”

“(Biden has) lived it with dignity his entire life, and it’s been a source of strength and comfort in times of extreme hardship,” Bates said.

Bates went on to reference the forced clearing of demonstrators from Lafayette Square outside the White House in June — an action that also included the gassing and expulsion of a priest and a seminarian who were aiding demonstrators from the patio of St. John’s Episcopal Church across the street — shortly before Trump visited St. John’s to take photos holding a Bible.

“Donald Trump is the only president in our history to have tear-gassed peaceful Americans and thrown a priest out of his church just so he could profane it — and a Bible — for his own cynical optics as he sought to tear our nation apart at a moment of crisis and pain,” Bates said. “And this comes just one day after Trump’s campaign abused a photo of Joe Biden praying in church to demean him, in one of the starkest expressions of weakness throughout this whole campaign.” 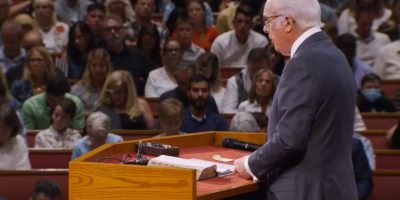 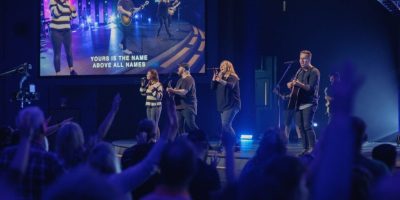 HENDERSONVILLE, Tenn., Sept. 4, 2020 (BP) – Every church has adjusted some aspects of ministryRead More