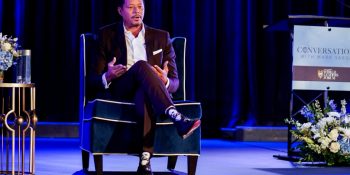 By Tom Siebert ELGIN, Ill., July 10, 2021 — Terrence Howard has a star on the Hollywood Walk of Fame, having appeared in 52 movies and 25 television shows. But the acclaimed actor told a Judson University audience on Friday that he would rather be known for reaching the real stars, through his newly developed drone technology that could improve border security, curb upper-atmosphere pollution, and even connect with space aliens. “We plan to take it to the asteroid belt between Mars and Jupiter,” said the 52-year-old Chicago native atRead More

by: Kathryn Post July 9, 2021 (RNS) — A prominent Anglican bishop has announced a leave of absence after admitting he mishandled allegations of abuse. Bishop Stewart Ruch III of the Anglican Church in North America’s Upper Midwest Diocese had known since 2019 that former lay minister Mark Rivera had been charged with felony child sexual abuse. But he did not tell people in his diocese about the abuse allegations until last month — which Ruch has called a “regrettable error.” That decision — and controversy over Ruch’s, as wellRead More