[T]he Champaign-founded band was not only kicking off its latest U.S. tour...

AURORA, Ill., July 2, 2021 — After riding out the storm of COVID-19, more than 6,000 REO Speedwagon fans couldn’t fight the feeling of unabashed joy last night, as the venerable rock band staged the first major concert in the Chicago area since the day the music died nearly 16 months ago.

Amidst the bucolic beauty of RiverEdge Park along the west bank of the glimmering Fox River in Aurora, the home-state heroes delighted the concert-starved crowd with a dazzling two-hour set of the power anthems and tender ballads that dominated rock radio throughout much of the 1970s and 1980s.

Charismatic lead singer Kevin Cronin stirred up the already-pumped audience with the evangelical zeal of a Southern preacher. He is, after all, from south suburban Oak Lawn.

“Check yourself out!” Cronin shouted, after the Speedwagon played the relentless rocker “Keep Pushin’” from the 1976 album “R.E.O.,” which marked the vocalist’s return to the group after a two-year hiatus.

“Look at this!” he marveled to the cheering, fist-raising, peace-sign-giving crowd. “We’re out! We’re at a rock and roll show!”

With COVID-19 subsiding and the so-called Delta variant of the coronavirus concerning, there was not a protective mask in sight at the scenic, 10-acre park where rock returned.

Then he noted that the Champaign-founded band was not only kicking off its latest U.S. tour but also celebrating the 40th anniversary of the release of their blockbuster album “Hi Infidelity,” which sold 10 million copies and yielded six smash singles that owned the FM airwaves throughout the year of 1981.

Then they tore into one of those fabled numbers, the infectious “Don’t Let Him Go,” driven by Dave Amato’s swirling guitar riffs and Cronin’s distinct yodel-like vocalizing.

The most faithful fans had camped out under the late afternoon sun in order to lay claim to the standing-room-only spots at the front of the titanic stage, with its pavilion wings and cedar-planked sound wall.

But the thousands who arrived an hour or two prior to the show’s 8 p.m. scheduled start had to endure long lines along Broadway, north of downtown, before being greeted by RiverEdge staff at the security checkpoints into the park.

Most people sat on lawn chairs or blankets, eating vendor food, drinking beer or lemonade, or just resting from the long, strange trek––that is, until Cronin began to sing these nursery rhyme-like lines:

Heard it from a friend who

Heard it from a friend who

Heard it from another you been messin’ around

Immediately recognizing the lyrics from the mega-hit “Take It On the Run,” many in the audience rose up like Lazarus and joyfully sang along.

The mostly Baby Boomer crowd provided vocal assistance on practically every song that REO performed, emblematic of the loyal fire that the band’s fans have kept burning for them during the past half-century.

The group got its name way back in 1967 when keyboardist Neal Doughty saw the name “R.E.O. Speed Wagon,” referring to a 1915 truck designed by Ransom Eli Olds, on a blackboard in his history of transportation class at the University of Illinois.

REO Speedwagon started out playing the Champaign-Urbana bar circuit, barnstormed the Midwest for several years, and released ten albums with varying success––most notably 1973’s “Ridin’ the Storm Out” and 1978’s “You Can Tune a Piano but You Can’t Tuna Fish.”

Then came 1981’s “Hi Infidelity,” a wry take on the band’s lifestyle at the time, and they became global pop stars.

That landmark album also gave them their first Number One song, “Keep On Lovin’ You,” whose opening lyrics sent Thursday night’s concert crowd straight into rock ‘n’ roll heaven.Many sang transportedly along, perhaps lost in memories of a romance gone bad or good.

You should have seen by the look in my eyes, baby

There was something missin’

You should have known by the tone in my voice, maybe

But you didn’t listen

And I’m gonna keep on lovin’ you

‘Cause it’s the only thing I want to do

“Keep On Lovin’ You” is now a mainstay at proms, weddings, karaoke bars, and classic rock stations, including Aurora’s own The River 95.9-FM, which was prominently present at the gig, after giving away free tickets to some lucky listeners.

And yes, REO, which has sold 40 million records worldwide, did play 1984’s chart-topper “Can’t Fight this Feeling,” “Keep the Fire Burnin’” from 1982’s “Good Trouble” album, along with a soaring “Time for Me to Fly,” again from “Hi Infidelity,” and 1979’s “Back On the Road Again,” which featured bassist Bruce Hall on lead vocals.

The showstopper of the evening was the thunderous “Ridin’ the Storm Out,” title track from the popular LP.  The iconic song stems from an earlier iteration of the band that was stranded during a Colorado blizzard.

But “Ridin’ the Storm Out” took on added gravitas Thursday night, in the painful wake of the COVID-19 pandemic that has taken the life of nearly 4 million citizens of the world.

Moreover, the coronavirus crisis was not the first health storm that REO has ridden out. During their first two decadent decades, the Speedwagon was fueled by alcohol and other drugs.

They went through three singers, two drummers, two bass players, and two guitarists including creative force Gary Richrath, who left the group to form his own band in 1989, and passed away at the age of 65 in 2015. 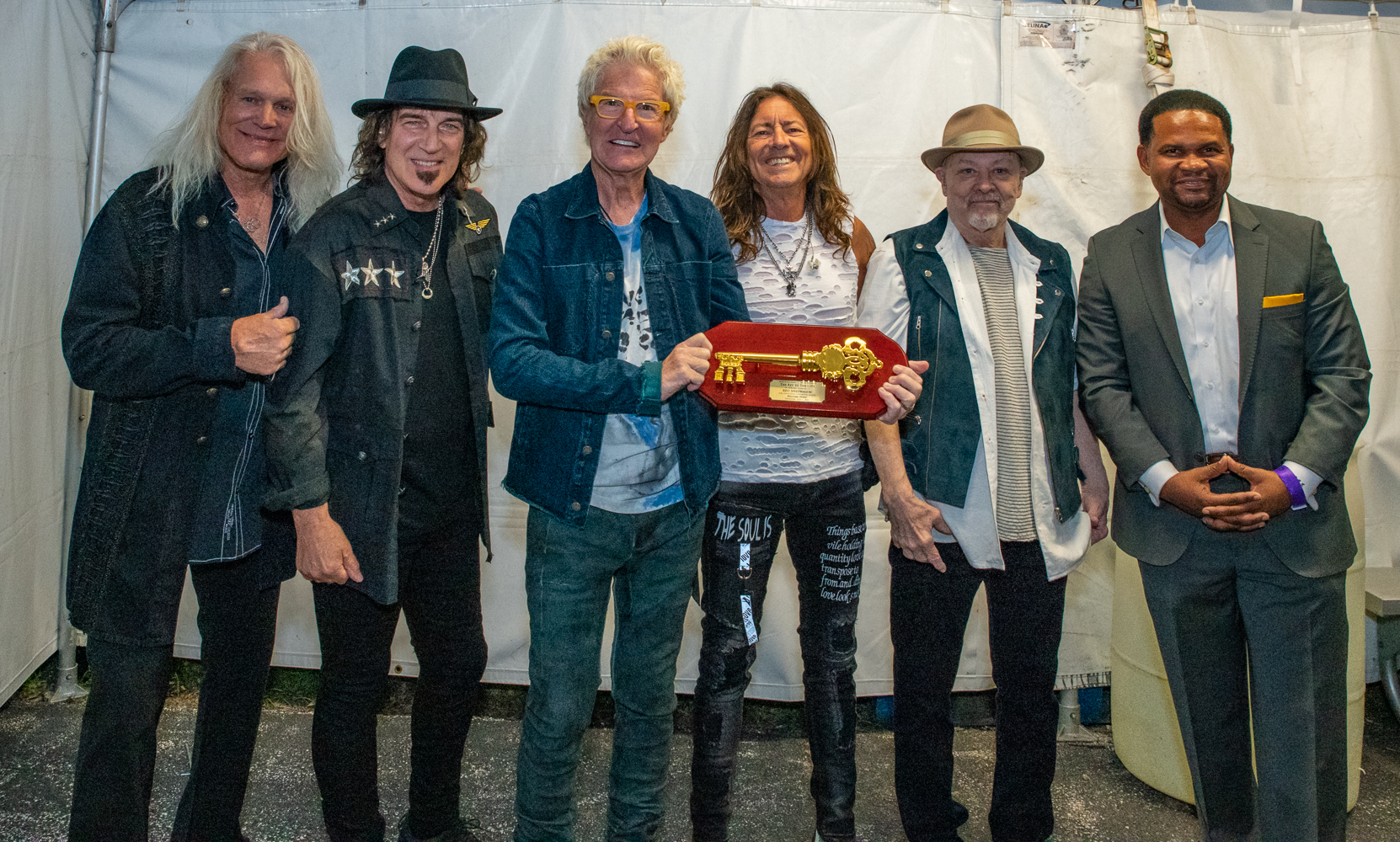 However, the band’s current line-up, which includes gifted drummer Bryan Hitt, has been performing together for more than 30 years.

Opening for REO was Head East, who also hail from Central Illinois and has shared many concert bills with the main act.

The talented musicians performed a lively half-hour set that included album-oriented radio standards “Since You’ve Been Gone,” “Love Me Tonight,” and “Never Been Any Reason,” with its signature line that many in the audience knew and sang heartily:

Save my life/I’m going down for the last time

RiverEdge Park, the public access project of Aurora’s late Mayor Tom Weisner, began hosting summer concerts in 2013. Last season was completely canceled due to COVID-19, while this year’s schedule was delayed for a month.

Last night, REO’s final encore was yet another song of survival, “Roll with the Changes,” and seemingly everyone sang the chorus “Keep on rolling!”

And so it was altogether apropos that these soul survivors should resurrect rock concerts at a pretty park on a gorgeous night in the City of Lights.