The use and possession of weapons should be made “immoral” under official Catholic teaching...

by: Emily Churchill
ABOARD THE PAPAL PLANE, Nov. 26, 2019 (RNS) — Pope Francis’ view on nuclear weapons can be summed up in a few simple words.

The use and possession of weapons should be made “immoral” under official Catholic teaching, Francis told reporters aboard the papal plane Tuesday (Nov. 26) taking a new step in terms of the Vatican’s position on this issue.

He also expressed reservation concerning the use of nuclear energy.

“An accident (through the) possession or the folly of some leader could destroy humanity,” Francis said. “I have a personal opinion: I wouldn’t use nuclear energy until it is totally safe to use it.”

Francis made the comments during a news conference on his way back from a weeklong apostolic visit to Thailand and Japan.

The pope answered eight questions from journalists traveling with him on the papal flight. The questions ranged in topic from the financial scandals that have been hitting the Catholic Church in recent months to the death penalty being used in so-called Christian nations.

He also commented on the political unrest in his native South America, which he admitted to be “in flames,” and the ongoing protests in Hong Kong against the extradition of its nationals to China.

During his trip to Japan, Pope Francis visited Hiroshima and Nagasaki, the two cities hit by atomic bombs a few days apart in early August 1945.

“Hiroshima was a true human catechesis on cruelty,” Francis said.

Francis also addressed the financial scandals that have been plaguing the Vatican in recent months, for the first time since Vatican police raided the offices of the Vatican Secretariat of State in October.

The pope said Tommaso Di Ruzza, who directed the Vatican’s anti-money laundering entity, was arrested Tuesday along with four other Vatican employees, including one clergyman. All are being interrogated by Vatican police.

According to reports by Italian media, the new wave of financial scandals is tied to risky investments by the Vatican Secretariat of State into underperforming prime real estate in London. Some of the funds for those investments came from Peter’s Pence, which collects funds from around the world to be used for charitable work. Several middlemen who helped arrange the investment have profited millions for the deal, according to reports by the Financial Times.

Francis said the arrests are a sign the Vatican is making progress in fighting corruption.

“The denunciation did not come from outside the Vatican, it came from the inside,” Francis said, spinning the scandals as a victory in the Vatican’s ongoing efforts to clean up its financial arm.

The pope said there is nothing wrong in investing Peter’s Pence, the money that is collected across the world for the church, in what he called “widow’s investments,” meaning small and safe ventures.

But things change, he added, if there are signs of corruption.

“It is a very bad thing. It is not good that these things happen inside the Vatican, but everything has been clarified by internal mechanisms which are starting to work,” he said.

Francis gave credit to his predecessor, Emeritus Pope Benedict XVI, for taking steps to reform the Vatican’s finances in the past.

“Pope Benedict was very wise,” said Francis. “He started a process that matured and matured.”

Francis also criticized the “hypocrisy” displayed by several Christian nations that claim to be in favor of promoting peace while profiting from the global arms trade.

“A country should have the courage to say I cannot speak about weapons because my economy grows a lot thanks to the production of weapons,” he said, observing that today “peace is really, really weak.”

Francis also referred to the uprisings and demonstrations in Argentina, Uruguay, Brazil and Bolivia as a situation “in flames.” He added that the growing unrest in Chile “frightens” him.

The pope said that Venezuela and Bolivia have reached out to the Holy See to mediate the profound divisions that risk tearing the countries apart. He also briefly mentioned the ongoing protests in Hong Kong, asking for peace and dialogue so that problems may be solved.

He also said he would love to visit Beijing.

(An earlier version of this story incorrectly claimed that Pope Francis had labelled the use of nuclear energy as immoral. The story has been corrected.) 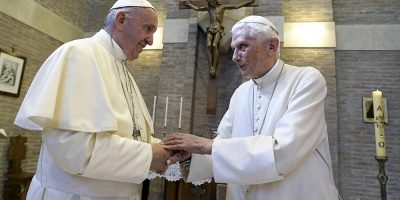