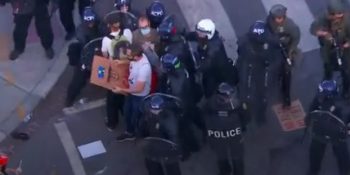 by: Jack Jenkins WASHINGTON, June 2, 2020 (RNS) — Early Monday evening (June 1), President Donald Trump stood before the historic St. John’s Episcopal Church in downtown Washington and held aloft a Bible for cameras. The photo opportunity had an eerie quality: Trump said relatively little, positioned stoically in front of the boarded-up church, which had been damaged the day before in a fire during protests sparked by the death of George Floyd on May 25 in Minneapolis. The church appeared to be completely abandoned. It was, in fact, abandoned,Read More

The bible teaches us that “God is love.” 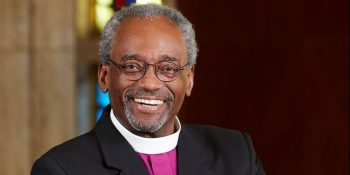 June 1, 2020 (ENS) — The following is a statement from Episcopal Church Presiding Bishop Michael Curry: This evening, the President of the United States stood in front of St. John’s Episcopal Church, lifted up a bible, and had pictures of himself taken. In so doing, he used a church building and the Holy Bible for partisan political purposes. This was done in a time of deep hurt and pain in our country, and his action did nothing to help us or to heal us. The bible teaches us thatRead More

The protesters appeared to be acting peacefully before they were dispersed by force. 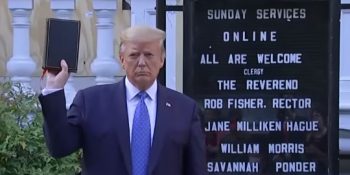 by: Alejandra Molina June 1, 2020 (RNS) — Posing for the cameras, President Donald Trump held a Bible at St. John’s Church near the White House on Monday evening after law enforcement cleared protesters out of the area with tear gas before his visit. The protesters appeared to be acting peacefully before they were dispersed by force. Tear gas canisters could be heard exploding as Trump spoke in the Rose Garden. He then walked over to the 200-year-old church that over the weekend was set on fire as demonstrators clashedRead More