How Could Tyranny Destroy Our Democracy?

How Could Tyranny Destroy Our Democracy?

Political scientists and historians are increasingly expressing profound concerns about the future of democracy in the West. I have been asking, as an amateur historian of America, “How and why do democracies die?”

The study of democratic backsliding, though around for a long time, is becoming more urgent as we watch events unfold so rapidly it creates deep concern in many of us. In the mid-2000s, the global spread of democracy, after 200 years of expansion, clearly began to stall. Perhaps it was the Iraq War and the events in the Middle East but however we understand what happened since 9/11 populist movements in the West began to arise and grow in number. This new form of Western populism, joined with a growing passion for nationalism and a seriously distorted form of exceptionalism, are now impacting America on a daily basis. This feels a lot like something we’ve seen before, in other places, but I do not think mosts of us are paying attention.

This new expression of Western populism bears more than a passing resemblance to Latin American populist waves that turned authoritarian very quickly. (Perhaps this is why Pope Francis is so open about his warnings to the West!) One columnist wrote today, “The warning signs for Western democracy are flashing red!” At the risk of being the little boy who cried wolf day-after-day, I profoundly agree with this concern.

Over the weekend I watched Timothy Snyder, professor of history at Yale University, make some bold and fearless connections between the history of the 1930s in Europe and modern American history in 2017. Snyder is the author of a new (readable and small) book, On Tyranny: Twenty Lessons from the Twentieth Century(Random House, 2017). In this book professor Snyder lays out twenty simple, short, readable warnings about how we can lose our democracy to tyranny. He says it can happen so fast we may not even realize it when it comes. If we, for example, saw another economic collapse then the likelihood of tyranny is much, much higher. (Start reading your dusty copies of Arendt, Orwell and other similar writers.) Of the twenty lessons Snyder gives here is but one:

Be alert to the use of the words extremism and terrorism. Be alive to the fatal notions of emergency and exception. Be angry about the treacherous use of patriotic vocabulary.

Since 9/11 the constant threat of extremism and terrorism has so gripped our nation that some of the most faithful Christians among us are terrified. They seem focused on this as the gravest danger of all to the church. Not so! The gravest external danger, especially for Christians, is the use of patriotic vocabulary with our Christian vocabulary and then the simple equation of American exceptionalism with the real progress of God’s kingdom. (Read my sentence again, slowly.) Why do I make this argument? Because I have read Dietrich Bonhoeffer for fifty years and he saw this happening in Germany and understood it with remarkable insight. We are NOT Germany but the same forces can arise here and the same patterns can emerge. One key is to see how we speak and debate our current time. This Snyder’s “Lesson Seventeen” above. 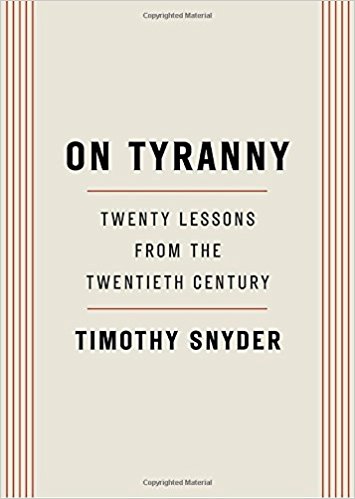 I have said again and again I am not deeply partisan about supporting one of our two political parties. I do not think they are as different as most think they are. In fact, the only “wild card” in the last election cycle was Donald Trump. (Who knows what his “real” party interest is since he has no clear ideology?) What I do think is this – people feel voiceless and besieged on many fronts and they want change. They did not carefully consider, since they hardly ever do, what this change would do to them but they wanted change more than leadership and character. At their core they wanted to be protected because they were losing their jobs and/or they feared they would die in a terrorist episode. For Christians they bought the narrative since the 1950s that the pagans were stealing their country from them and they honestly hoped Trump would take it back and thus “Make America Great Again!” (It is highly unlikely that within the U.S. terrorism will be the cause of your death. In America, more people will die this week from opioid abuse than will die in the next year from terrorism!)

Our Founding Fathers tried to protect us from threats they profoundly understood. They knew that tyranny had historically defeated democracy, as far back as ancient Greece. This is why they gave us a constitutional republic. That republic has now lasted longer than any such government in history. Is it’s future guaranteed? The founders knew better than to assume a positive answer. They deeply feared that we would lose the republic when we no longer understood it or saw see how to protect it. I think we face a time when we understand our republic less than at any previous time in history. The continued moral breakdown of our culture is a factor but it is naive too think that this is the singular factor, as many pietistic conservatives think. Snyder is right, “We are no wiser than the Europeans who saw democracy yield to fascism, Nazism, or communism. Our one advantage is that we might learn from their experience.” I earnestly pray: “God in heaven, may it be so.” A nation that will not humble itself and learn will fall from within. In the 1950s I listened to communists tell us “America would fall from within.” I think they understood this danger better than everyday Americans did then or now. Nikita Krushchev once said “We will bury you.” He was wrong. But he also said we would “bury” ourselves. He could be proven right on this front. Will we preserve our way of life politically? The jury is considering the outcome now. It is too soon to tell. May God grant us wisdom to know what is just, good and right. Micah 6:8 somehow seems to apply more than ever. 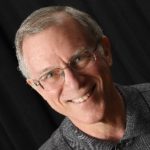 President, ACT 3 Network, and author of Your Church Is Too Small (2010) and The Unity Factor (2011). Teacher, mentor and missional collaborator. Minister in Reformed Church (RCA).  johna1949@gmail.com

« Pondering the Syrian Context on the Day After Our Nation Launched Fifty Tomahawk Missiles (Previous News)
(Next News) War: The Most Dreaded Enemy of Liberty »